Idaho Bill Allows Teachers To Use Bible As Science Textbook

Child abuse for Jesus: Republicans in Idaho have approved a bill allowing teachers to use the Bible as a textbook in science classes like astronomy, biology and geology.

The Senate Education Committee has approved a measure introduced by state Sen. Sheryl Nuxoll that would permit teachers to use the Bible “for reference purposes” in classes such as astronomy, biology and geology.

The Bible is expressly permitted to be used in Idaho public schools for reference purposes to further the study of literature, comparative religion, English and foreign languages, United States and world history, comparative government, law, philosophy, ethics, astronomy, biology, geology, world geography, archaeology, music, sociology, and other topics of study where an understanding of the Bible may be useful or relevant. No student will be required to use any religious texts for reference purposes if the student or parents of the student object.

In other words, Republicans in Idaho want their public school teachers to feel free to teach and preach the Bible in any and every classroom in the state.

The bill is a transparent attempt by conservative Christian Republicans to promote Christianity in the public schools. The legislation would allow unethical teachers to indoctrinate innocent children by substituting the promotion of Christian superstition for legitimate academic study.

One need only imagine the reaction by these Republican theocrats if instead of the Bible, teachers were to use the Quran in the classroom, to realize the rank hypocrisy of the Idaho GOP for supporting this legislation.

To be sure, the legislation is in part an attempt to smuggle Creationism into the public school science classroom. Yet perhaps more sinister, the legislation is another sign of a creeping theocracy promoted by religious conservatives, a theocracy that threatens the secular values upon which this nation was founded.

Bottom line: When conservative Christians win, children always lose. Imagine the poor kid in some Idaho public school forced to listen to some pompous ass masquerading as a teacher preach Christianity instead of teaching science. It is, in a word, heartbreaking. 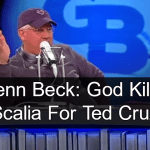 February 17, 2016 Glenn Beck: God Killed Scalia For Ted Cruz
Recent Comments
0 | Leave a Comment
Browse Our Archives
get the latest from
Progressive Secular Humanist
Sign up for our newsletter
POPULAR AT PATHEOS Nonreligious
1