In Mississippi, ‘Soldiers of God’ are given permission to kill.

Mississippi lawmakers have passed legislation that would allow churches to appoint security forces with a “shoot to kill” authority equivalent to a police officer but with less government oversight.

Yahoo! News reports the Mississippi State Senate voted 36-14 in passing House Bill 786, also known as the Mississippi Church Protection Act. Under the legislation, places of worship could designate members to undergo firearms training and carry guns to protect the congregation, and would legalize killing a person while acting as a participant of a church or place of worship security team, deeming the act a “justifiable homicide.”

According to the Jackson Clarion-Ledger, House Bill 786 would also block state officials from enforcing federal regulations or executive orders that would conflict with the state constitution.

Unfortunately, our nation has seen tragic incidents carried out in places of worship. Mississippians should be able to attend church knowing they have security measures in place to protect them from anyone trying to do them harm.

The ‘Mississippi Church of Protection Act’ is well deserving of the title for ‘Worst State Bill.’ This legislation would put ‘soldiers of God’ above the law, allowing them to act as judge, jury, and executioner. Religious institutions are already exempt from taxation, financial transparency, and many civil rights laws. The Mississippi Church Protection Act would constitute an unprecedented and dangerous next step. Belonging to a church should not afford anyone the same rights and protections as law enforcement. This legislation emboldens extremists by creating a legal means for radical preachers to enlist their congregants into ‘God’s army.’

Friendly Atheist points out the legislation would apply not only inside churches, but to any church-sponsored event in Mississippi where firearms are not already prohibited:

Church picnic at a public park? The security team can be there with guns at the ready.

Bottom line: Giving religious extremists a green light to form a private police force to protect themselves against imaginary threats is a recipe for disaster. 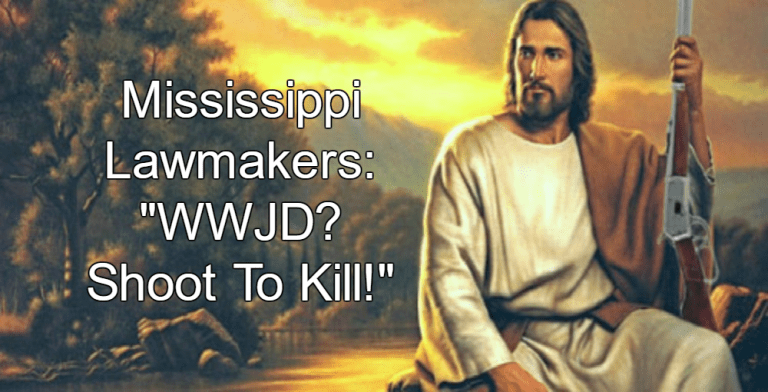 March 30, 2016 Donald Trump: Women Who Have Abortions Should Be Punished
Recent Comments
0 | Leave a Comment
Browse Our Archives
get the latest from
Progressive Secular Humanist
Sign up for our newsletter
POPULAR AT PATHEOS Nonreligious
1