Speaking about the disturbing violence that forced Trump to cancel a rally scheduled in Chicago Friday night, Maddow opined:

Maddow explains that “it is impossible” to call violence at Trump events “an accident,” noting the potential and historical political utility of promoting political violence:

This is a classic strong man political tactic that we are used to seeing in other countries but not our own. Certainly not in the last 50 years or so, in which political events are generated to bring violence at the edges into the center. So that violence at these events, which may start organically, is in effect spot lit and encouraged to the point where it becomes something that is legitimately out of control of anyone. And then the spectacle of political violence is itself seen as something that is a problem that needs to be solved by this strongman character who incited the initial event in the first place.

It’s political science in way. It’s not something that we’re used to seeing in American politics. But trying to gin up political violence for its electoral utility is inarguably what we are seeing here.  I know the Trump campaign will not say that is what they’re doing. But when you look at the way that Mr. Trump has been talking about the organic existence of both protesters against him and violence toward those protesters at his event, when you look at the way that he has encouraged it in an escalating way leading to this inevitable event tonight in Chicago, I think that it is impossible to say that this is an accident.

Maddow is correct. Trump has been courting political violence for some time now. Indeed, the deliberate incitement to violence, is straight out of the fascist playbook. 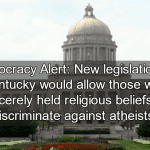