Leading creationists claim Stonehenge was built by a race of giants created by Satan to destroy Israel.

While appearing on the Jim Bakker Show earlier this month, Dennis Lindsay, PhD, a leading figure in the area of “Creation Science,” made his argument that Stonehenge was built by a race of giants created by Satan.

Televangelist Jim Bakker invited Dr. Lindsay on to his program to discuss Lindsay’s latest discovery in the mysterious field of “Creation Science.”

Lindsay told Bakker that Stonehenge was built by giants who were created by Satan, and that these giants were tools of the devil, who wanted to destroy Israel.

he’s out to destroy God’s creation and his whole plan of redemption and contaminate the human race.

Lindsay explained that Satan wanted to “have his own seed and make his own family,” and so he created a race of giants who would attack Israel.

He (Satan) build his little squatter’s hut up there on the Temple Mount, you know that temple, because he knows what the Bible says about that place. I weaved through why and what is the evidence for giant beings on this earth. We all know about Stonehenge, right? That’s just one of hundreds and hundreds of gigantic places around the world that testify that some sort of supernatural power or giants were involved in its construction.

Explaining why Satan would want to destroy Israel, Lindsay warned:

He’s out to destroy God’s creation and his whole plan of redemption and contaminate the human race because Jesus came not to save hybrids or non-human beings or fallen angels or Lucifer. He came to save human beings and to have a family.

Lindsay is president and CEO of Christ For The Nations, and the author of Giants, Fallen Angels and the Return of the Nephilim.

Bottom line: Creation Science is an oxymoron; and as a scientist, Dr. Lindsay is a fraud. Yet the sad fact is that many Christians will believe that this twisted fantasy is true. Adding insult to injury, there are children who are being taught this pseudo-scientific nonsense either in homeschool or some private Christian academy. 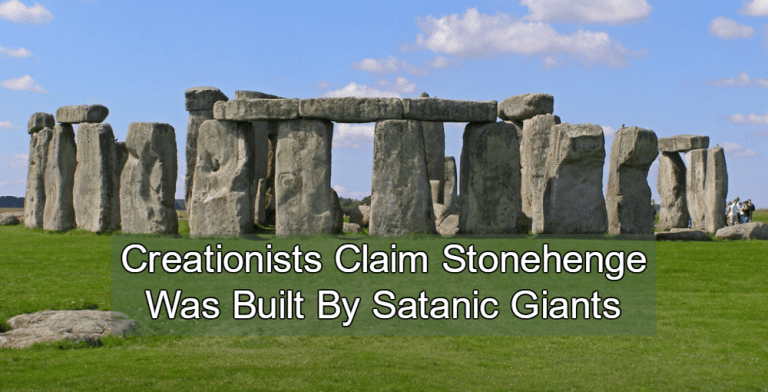