Christian bigots have launched a boycott against Target after the company released a statement earlier this week in support of transgender people.

In the statement Target says it encourages transgender people to use whichever restroom or fitting room that matches their gender identity, saying inclusivity is a “core belief at Target.”

Yet what should have been a non-controversial statement of tolerance set off a firestorm of Christian panic.

In response to Target’s statement of inclusivity, The American Family Association, a conservative Christian advocacy group, started a petition on social media using the hashtag #BoycottTarget.

As of Sunday morning the petition had already gathered over 327,000 signatures and had been widely shared by conservative Christians via social media. The petition reads:

Until Target makes the safety of women and children a priority, I will shop elsewhere.

Ostensibly, the petition claims to protect “women and children,” but in reality it is a thinly veiled expression of Christian bigotry and hatred towards the transgender community.

A recent report issued by Media Matters cites experts from twelve states – including law enforcement officials, state human rights workers, and sexual assault victims advocates – who debunk the myth that transgender non-discrimination laws and policies have any relation to incidents of sexual assault or harassment in public restrooms.

Bottom line: The irrational backlash against Target’s humane policy is another example of transgender bathroom hysteria. It is a myth that transgender people pose a danger in public bathrooms, a myth promoted by conservative Christians who hate what they don’t understand. 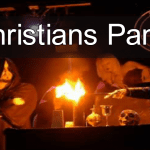