Domestic terrorists Ammon and Ryan Bundy don’t like being in jail.

The domestic terrorists claim jail conditions are violating their constitutional rights, and they are contemplating a lawsuit against the Multnomah County Sheriff’s Office concerning conditions at the county detention center.

OPB reports that in court documents released Tuesday, the domestic terrorists behind the Malheur National Wildlife Refuge occupation give a list of conditions at the jail they said are violating their constitutional rights.

Among the complaints, the Bundys and several other occupiers — including Kenneth Medenbach, Pete Santilli, Jason Patrick, Blaine Cooper and Ryan Payne — said they should have more access to the jail’s law library, discovery materials, office supplies and religious underwear.

Sheriff’s office officials rejected many of those requests.

In a statement Ryan Bundy wrote:

Is Bundy honestly surprised that he has less freedom while being incarcerated? Is he really asking for Second Amendment rights while serving time? What does he expect, open carry jails?

Including being permitted to wear temple garments beneath their jail clothes, being permitted to gather together with other LDS adherents to give and receive blessings, and extra towels or bedding in their cells to allow for kneeling to pray.

OPB reports the sheriff’s office denied the Bundys access to Latter-day Saints gatherings as requested because they are ordered to be separated, but said they could have an extra towel and wear religious garments under jail uniforms if they are worn in a “agreed-upon manner.”

Counsel will be responsible to arrange for soiled garments to be collected for laundering weekly and to ensure clean garments are provided in exchange.

In Mormon folk religion, Garments have special powers. Stories are told of wearers being saved from bullets or a fiery death in a car crash. One story tells of a Mormon soldier during WWII who was killed by a Japanese flame thrower – but his Garment survived intact. The stories go back to Joseph Smith himself, who died in a hail of bullets without his Garment on. His companion, Willard Richards, who was wearing his, emerged unscathed. Mormon historian Hubert Bancroft described the incident in his 1890 “History of Utah”: “This garment protects from disease, and even death, for the bullet of an enemy will not penetrate it. The Prophet Joseph carelessly left off this garment on the day of his death, and had he not done so, he would have escaped unharmed.”

Ammon and Ryan Bundy are religious extremists  motivated by an anti-government theology found in Mormon scripture. However, the Church of Jesus Christ of Latter-day Saints vigorously rejects the Mormon fundamentalism advocated by the Bundys, and issued the following statement at the time of the terrorist occupation:

Church leaders strongly condemn the armed seizure of the facility and are deeply troubled by the reports that those who have seized the facility suggest that they are doing so based on scriptural principles. This armed occupation can in no way be justified on a scriptural basis.

The Bundys and their co-defendants face a series of felonies for taking over the refuge near Burns, Oregon, for 41 days, including conspiracy to impede federal workers, weapons charges and damage of government property.

Bottom line: The authorities said “yes” to magic underwear, and “no” to guns.

May 26, 2016
Father Forced 14-Year-Old Daughter To Marry Her Rapist
Next Post 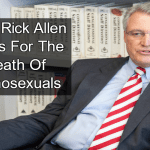 May 27, 2016 GOP Congressman: LGBT People ‘Worthy Of Death’
Recent Comments
0 | Leave a Comment
Browse Our Archives
get the latest from
Progressive Secular Humanist
Sign up for our newsletter
POPULAR AT PATHEOS Nonreligious
1