In a victory for human rights, the Obama administration issued a sweeping directive on Friday telling every public school district in the country to allow transgender students to use the bathrooms that match their gender identity.

However, in reaction to the fair and just policy move, conservative Christians in the South reacted with horror.

Lt. Gov. Dan Patrick, speaking to reporters Friday, said his state “will not yield to blackmail from the president of the United States,” declaring:

This goes against the values of so many people. This has everything to do with keeping the federal government out of local issues.

Patrick went on to compare transgender students having the right use a bathroom to removing forced prayer from public school:

Transgenderism (sic) is a mental disorder called gender identity disorder — no one should be forced to entertain another’s mental disorder and it is not healthy for the individual with the disorder.

If the president chooses to go forward with this outrageous order – then congress should begin impeachment proceedings.

Perkins said the decree should be “resisted with every legal and moral instrument we have available to us in this country,” saying:

Every parent, every school board in America should absolutely refuse to sacrifice the safety of their children for the threat of taking away nine federal pennies that make up every educational dollar.

It’s an outrageous attack on our Creator Himself, upon human sexuality and morality and a further advancement of the flagrant attack on religious freedom in our culture.

We must defy Obama’s transgender decree — no matter the cost.

The above remarks are but the tip of the iceberg of a long and sustained howl from conservative Christians angry that their privilege has been challenged, and their prejudice and bigotry is being overturned.

Bottom line: Expect more whining, and more claims of Christian persecution, as the long arc of the moral universe slowly bends towards justice.

May 13, 2016
Oklahoma Lawmaker Claims Gays Are Worse Than Terrorists
Next Post 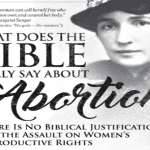 May 14, 2016 Freethinkers Refute Bible Based Opposition To Abortion
Recent Comments
0 | Leave a Comment
Browse Our Archives
get the latest from
Progressive Secular Humanist
Sign up for our newsletter
POPULAR AT PATHEOS Nonreligious
1