In an anti-Obama rant the Focus on the Family founder said that transgender people using public restrooms should be shot. Writing for World Net Daily Dobson complained about President Obama’s order to “every public school in America to open all its bathroom facilities including those that are in use by a member of the opposite sex.” Dobson wrote:

Raw Story notes that in his post Dobson comes dangerously close to echoing the same rhetoric that was used by white men in the south when organizing a lynching.

Warning that the Obama administration’s recent directive on the rights of transgender students could bring down all of Western civilization, Dobson asked:

Have we gone absolutely mad? Did it upset you when the president of the United States ordered every public school in America to open all its bathroom facilities including those that are in use by a member of the opposite sex?

The president’s order made me furious, and then sick to my stomach. How dare this man do something so audacious and unthinkable!

Dobson accuses Obama of “warping our children” and “wielding dictatorial powers never envisioned in the law” –  a “tyrant” who is “is determined to change Western civilization forever.”

Dobson goes on to lament the changing world, writing:

How the world has changed! Who would have believed a day would come during my lifetime when boys could meander into the private sanctuary of girls’ toilets, or that it would someday be a civil right for men to use women’s locker rooms and showers without permission or apology? Imagine sex-absorbed junior high boys ogling the bodies of developing pubescent girls or standing beside them in their showers. Have we gone absolutely mad? What ever happened to modesty, safety, and Christian mores?

Did it upset you when the president of the United States ordered every public school in America to open all its bathroom facilities including those that are in use by a member of the opposite sex? The president’s order made me furious, and then sick to my stomach. How dare this man do something so audacious and unthinkable! His letter from the White House carried an implied threat to withhold federal money from local schools, which rocked the halls of public education. Who is this politician that is spending your hard-earned tax dollars to manipulate school officials, anyway? Who is it that is warping our children? It is Barack Obama, one of the worst presidents in American history, and it is time we stood up and said so!

(You are probably aware that Target has taken a stand to allow persons who “self-identify” as a man or woman to use the restroom of their choice. In addition to Target Stores, the following retailers have also decided, against the objection of their customers, to create “gender neutral” bathrooms: Starbucks, Ross, Walgreens, Toys “R” Us, and Barnes & Noble. My wife, Shirley, and I will no longer patronize these stores, and I hope millions of others will do likewise.)

And continues his demonization of Obama:

Let’s talk more about Barack Obama, who is a tyrant in many ways. How dare he assault centuries of modesty and moral beliefs! By what authority does he tell parents and school officials what to teach children under their care? Christian parents, does this outrageous order violate something deep within your sense of propriety? The president has already maneuvered the courts to undermine a 5,000-year-old definition of marriage, after experiencing his infamous epiphany. Now he is determined to change Western civilization forever. He becomes more reckless and defiant as his second term comes to an end. Never has an American president been so absorbed with the use and abuse of power, and unfortunately, he still has seven months to go. What is next?

Dobson concludes by urging parents to protect their children from ideas he considers to be dangerous:

Clearly, there are serious implications here for mothers and fathers. I urge you to protect your boys and girls from those who are espousing these views. Shield them from gender feminism and from those who would confuse their sexuality. They will be under increasing political pressure in years to come.

Dobson’s rant is a long and sustained howl from a conservative Christian angry that his privilege has been challenged. The fact that he is giving Christian conservatives permission to shoot transgender people using a public bathroom is despicable and irresponsible: a potent reminder of the bigotry, prejudice, and danger transgender people must face on a daily basis. 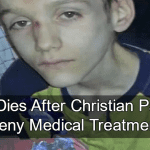 May 31, 2016
Faith Healing Suspected In Death Of Canadian Teen
Next Post 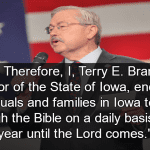 June 3, 2016 Iowa Governor Promotes Christianity As Official State Religion
Recent Comments
0 | Leave a Comment
Browse Our Archives
get the latest from
Nonreligious
Sign up for our newsletter
POPULAR AT PATHEOS Nonreligious
1