Trump campaign selects a prominent white nationalists to serve as a California delegate.

William Johnson, head of the American Freedom Party and one of the country’s most prominent white nationalists, has been chosen to serve as a delegate for Trump in the California primary.

MotherJones reports Johnson’s name appears on a list of delegates published by California’s secretary of state.

Johnson, architect of a pro-Trump robocall campaign urging white voters to elect Trump, confirmed that his application to serve as a delegate for the campaign was approved.

In order to be approved Johnson had to sign this pledge sent to him by the campaign:

I, William Johnson, endorse Donald J. Trump for the office of President of the United States. I pledge to cast ALL of my ballots to elect Donald J. Trump on every round of balloting at the 2016 Republican National Convention so that we can MAKE AMERICA GREAT AGAIN!

Johnson leads the American Freedom Party, a group that “exists to represent the political interests of White Americans” and aims to preserve “the customs and heritage of the European American people.”

Commenting on his selection, Johnson said:

I just hope to show how I can be mainstream and have these views. I can be a white nationalist and be a strong supporter of Donald Trump and be a good example to everybody.

Talking Points Memo report Johnson has been campaigning in support of Trump since last fall. He founded a Super PAC in November 2015 to raise money on Trump’s behalf, and launched a robocall get-out-the-vote effort in early voting states heaping praise on Trump’s anti-immigrant views. In press releases announcing the robocall campaign, the PAC referred to Trump as America’s “Great White Hope.”

May 10, 2016
Republican Lawmaker Defends Discrimination Against Atheists
Next Post 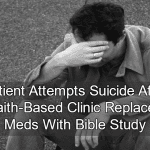 May 10, 2016 Patient Attempts Suicide After Faith-Based Clinic Replaces Meds With Bible Study
Recent Comments
0 | Leave a Comment
Browse Our Archives
get the latest from
Nonreligious
Sign up for our newsletter
POPULAR AT PATHEOS Nonreligious
1