An official state proclamation asks all Iowans to embrace Christianity.

Iowa Gov. Terry Branstad (R) plans to promote Christianity as the official state religion by encouraging all Iowans to take part in a statewide county courthouse Bible-reading marathon scheduled for later this year.

For four days all 99 county courthouses in Iowa will be filled with praying, proselytizing, Bible-reading Christians in a state-sponsored, state-sanctioned, promotion of Christianity.

Earlier this year Branstad issued the proclamation calling on all Iowans to participate in a statewide Bible reading marathon from June 30th to July 3rd that will be held in front of all 99 courthouses in the state simultaneously.

Critics and other reasonable people are quick to point out that Branstad’s official proclamation promoting Christianity is a clear and egregious violation of the U.S. Constitution.

In response to the proclamation the American Civil Liberties Union of Iowa and the Freedom From Religion Foundation said they were reviewing the matter with an eye toward litigation against the state.

In his proclamation, the governor urges Iowans to embrace Christianity, asking all “individuals and families in Iowa to read through the Bible on a daily basis each year until the Lord comes.”

Commenting on the unconstitutional nature of the proclamation, Annie Laurie Gaylor, co-president of Freedom From Religion Foundation, said:

The government is supposed to be neutral toward religion. Can you imagine the uproar if the governor used state resources to encourage people to go to a ‘God is Dead’ rally or a vigil to review how divisive religion is? Everyone can see how inappropriate that would be. This is exactly the same type of violation.

Rita Bettis, the ACLU of Iowa’s legal director, condemns the proclamation as “outrageous and embarrassing,” explaining that the issue is about endorsing a particular religion:

The governor’s proclamation is frankly outrageous and embarrassing, and inconsistent with our core American and Iowan principles of inclusion and respect of all its people of all faiths, as well as those who are not religious. Our U.S. and Iowa state constitutions protect from precisely this sort of government overreaching and endorsement of a particular faith. 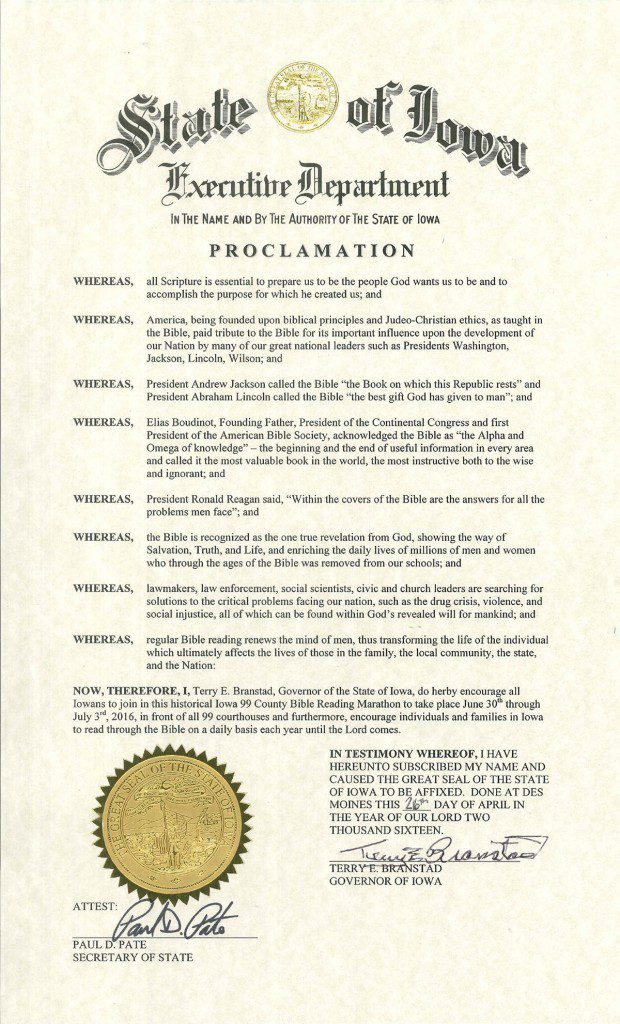