An ultra-orthodox Jewish rabbi of the Jerusalem neighborhood of Nahloat has banned girls age five and above from riding bicycles in some areas of Israel, claiming the activity is “immodest” and “provocative.”

The Independent reports the Jewish leader circulated the draconian decree among his followers in synagogues across the region.

According to the rabbi, young girls riding bicycles could “cause serious damage to their modesty” and that bicycle seats caused young girls to sit in a way men find “provocative,” according to a report issued by Arutz Sheva 7.

We inform parents that they are obligated to forbid their daughters from age five and up from acting in this illegitimate way.

The ruling is directed at members of the ultra-orthodox Haredi branch of Judaism, and is a disappointing reminder of the profound ignorance and bigotry so often associated with religious fundamentalists.

The rabbi’s decree begs the question:

Rabbi, what is going through your mind when you see a 6 year old girl ride a bike?

On a more serious note, the implication of the rabbi’s ruling is clear, and depressing. The rabbi believes that men must be protected from the “provocative” and “immodest” image of a girl over five riding a bicycle. The assumption is that all men are perverts and pedophiles who cannot control their urges, and must be protected from the image of a little girl riding her bike.

Bottom line: The Israeli rabbi worried about girls riding bikes, like other religious extremists who express similar concerns about girls being “immodest” and “provocative,” exhibits a twisted and misogynistic logic that insults the intelligence and ultimately demeans both men and women. 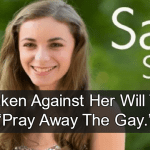 June 7, 2016
TV Star Fights To Rescue Cousin From ‘Pray Away The Gay’ Facility
Next Post