Trump: A Vote For Jill Stein Helps Me

Donald Trump supports Jill Stein, says a vote for the Green Party will help him win the election.

On the campaign trail Wednesday Trump praised Green Party presidential candidate Jill Stein, saying he would be happy if people voted for the Green Party candidate for president because it would draw votes away from Democratic presidential nominee Hillary Clinton.

During a rally in Toledo, Ohio, Trump said:

The Hill notes that Trump is correct, and that a vote for Stein does amount to a vote for Trump. They point to the 2000 presidential election, when Democrat Al Gore lost to Republican George W. Bush in a very close race, which was at least partially because Gore lost many liberal votes to Ralph Nader.

In essence, by dividing progressives, Jill Stein is working for the election of Donald Trump.

For many progressives, Jill Stein might seem like a reasonable choice in 2016, but she is not. Stein is a spoiler who would deny Democrats the White House, and bring ruin upon the nation.

There are plenty of good reasons why progressives should not support Stein. For example, Stein has no political experience; Stein joined Donald Trump in praising the bigotry driven Brexit decision, and then tried to cover-up her support of Brexit; and Stein, by representing the Green Party, panders to the anti-science crowd; but most important, Stein cannot win, and a vote for Stein is a vote for Trump.

Trump was asked about Stein because a small minority of people who once claimed to support Bernie Sanders say they will now support Jill Stein. This is puzzling, since Bernie Sanders has formally endorsed Hillary Clinton, and has rejected Stein’s offer to join her on the Green Party ticket.

In fact, earlier this week, Sanders warned his supporters that a vote for Jill Stein would be a mistake that would hurt the progressive cause. Sanders said:

I don’t know the leadership of the Green Party, but I respect what they’re trying to do. They’re focusing on very, very important issues. But I think right now — what is it, three, four months before an election — you’re gonna end up having a choice. Either Hillary Clinton is going to become president, or Donald Trump.

Sanders, like most rational progressives, recognizes that pragmatic concerns make Stein an unacceptable choice. The fact is, Stein cannot win in November. More important, a vote for Stein is in effect a vote for Donald Trump. For rational, pragmatic progressives, Trump is simply unacceptable, and Hillary Clinton is the only reasonable choice in 2016.

Bottom line: Donald Trump is right. He has a secret weapon. Her name is Jill Stein. 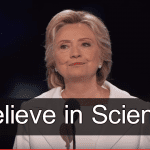