Pence rejects evolution, claims creationism is the only rational explanation.

Confronted by Hardball host Chris Matthews on evolution, Pence obfuscated on the issue, made appeals to God, and ultimately refused to acknowledge the scientific truth of evolution.

However, when serving as a congressman, Pence made it clear that he opposes evolution, and believes that only creationism (intelligent design) provides a “rational explanation for the known universe.”

In 2002, Pence delivered a passionate speech on the floor of the House of Representatives arguing that evolution is “only a theory” and that public schools should teach the theory of intelligent design as well as the theory of evolution.

In other words, for Pence, the only rational explanation is “God did it.”

In his speech, Pence also made the false and misleading claim that creationism is a valid scientific alternative to the theory of evolution, arguing that creationism should be taught alongside evolution in the public school science classroom:

I would simply and humbly ask, can we teach it as such and can we also consider teaching other theories of the origin of species? Like the theory that was believed in by every signer of the Declaration of Independence. Every signer of the Declaration of Independence believed that men and women were created and were endowed by that same Creator with certain unalienable rights. The Bible tells us that God created man in his own image, male and female. He created them. And I believe that, Mr. Speaker.

Pence, like many advocates for creationism, is uninformed and uneducated as to what the term “theory” means in a scientific context. For the record, the scientific definition of “theory” is quite different from the everyday use of the word.

The National Academy of Science notes:

The formal scientific definition of theory is quite different from the everyday meaning of the word. It refers to a comprehensive explanation of some aspect of nature that is supported by a vast body of evidence.

Pence is a dangerous religious extremist who promises that  if he and Trump win in 2016 abortion will be made illegal.

Bottom line: Creationism is not a valid alternative to the theory of evolution, and should not be taught in the public school science classroom.

Furthermore, Pence is a dangerous religious extremist, with no respect for science or the secular values upon which this nation was founded. If given the chance, he would turn the U.S. into a Christian theocracy.

August 3, 2016
Report: Trump Wants To Use Nuclear Weapons
Next Post 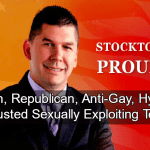