Blasphemy as civic duty and moral obligation in the preservation of liberty.

It is the moral obligation of clear thinking, reasonable people to stand up and speak out against religious superstition and ignorance, even if that resistance constitutes blasphemy in the mind of the believer.

Blasphemy is defined as the act of insulting or showing contempt or lack of reverence for a religious deity, or showing irreverence towards religious or holy persons or things. Yet how else is an honest and reasonable person to treat religious ignorance and superstition?

A lack of reverence for religious nonsense is a sane and healthy response to the irrational. Belief in supernatural nonsense deserves not respect, but scorn and contempt.

While individuals who have fallen victim to religious delusion deserve pity and empathy, the nonsense that makes up the stuff of religious belief deserves no such concern.

Reasonable people recognize that religious belief constitutes a clear and present danger to the human species. Currently it is dangerous, even deadly, in many parts of the world to express the simple fact that there is no convincing evidence for God, or to draw a picture of a certain holy figure.

Such a state of affairs is an affront to humanity, and should be both intolerable and repugnant to all good people.

It is shocking to note that almost half of the world’s countries have laws and policies that criminalize blasphemy, apostasy, conversion, or so-called “defamation of religion.” These “crimes” are sometimes punishable by death, as is the case in 12 countries, or life imprisonment.

Saperstein goes on to give examples of “the tragedy and suffering that is often behind these laws,” before concluding:

The task is daunting, but worthwhile because the repeal of blasphemy laws will ultimately bring about a more free and prosperous world.

Saperstein is right. Blasphemy laws represent an immoral and unjust infringement upon religious liberty and freedom of conscience.

And, as Saperstein points out, blasphemy laws often legitimize vigilantism, mob violence, and the persecution of minorities.

For example, in Saudi Arabia, atheists are considered terrorists, and atheism is prosecuted as a crime, with lengthy prison sentences or death for anyone “calling for atheist thought” or “calling into question the fundamentals of Islam.”

Blasphemy laws not only violate the human right to freedom of expression; they also protect religious beliefs and practices, as well as religious institutions and leaders, from legitimate, and often necessary, criticism.

In fact, any law prohibiting blasphemy should be of deep concern to all those who cherish free-speech, rational thought, and civilized society. 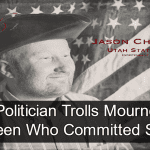 September 30, 2016 Alabama Supreme Court Justice Roy Moore Suspended For Anti-Gay Activism
Recent Comments
0 | Leave a Comment
Browse Our Archives
get the latest from
Nonreligious
Sign up for our newsletter
POPULAR AT PATHEOS Nonreligious
1