19 years after her death, Mother Teresa, the founder of the Roman Catholic religious congregation called Missionaries of Charity, was made a saint by Pope Francis in a ceremony at the Vatican.

While many Catholics celebrate “Blessed Teresa of Calcutta,” other observers are less sympathetic, and for good reason.

In fact, Mother Teresa was no saint, she was instead a moral monster, a sadistic religious fanatic who took pleasure in the suffering of others, and denied appropriate medical care to the sick and dying.

Yet the Catholic propaganda machine, eager for good publicity and the opportunity to hustle the gullible, continues to promote “Blessed Teresa of Calcutta” while ignoring evidence of her moral corruption.

One such example of her moral corruption, and her callous attitude towards the sick and dying in her care, was made abundantly clear in a recently discovered video.

In the video, Mother Teresa explains that poor people who are diseased are sinners that need to be forgiven. After bragging that at least 29,000 people were coerced into death bed conversions at her facility, the perverse nun declares:

It’s so beautiful to see them die.

Poor people who are diseased are sinners. They need to be forgiven. It’s s beautiful to see them die. #MotherTeresa pic.twitter.com/dpFtNmFDzD

This is the stuff of horror movies – coerced deathbed conversions, and a smiling, sadistic nun, taking delight in the death of others.

Update: Several readers have pointed out that  the above quote pulled from Mother Teresa in the video is incorrect, and should read:

It is so beautiful to watch the people die with so much joy.

The author wishes to apologize for any confusion this oversight may have caused.

Watch the entire video below – 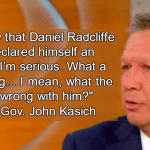 September 5, 2016 Ohio Governor Attacks Daniel Radcliffe For Being An Atheist
Recent Comments
0 | Leave a Comment
Browse Our Archives
get the latest from
Nonreligious
Sign up for our newsletter
POPULAR AT PATHEOS Nonreligious
1