For Pat Robertson, bragging about sexual assault is no big deal.

Robertson dismissed Trump’s confession that he sexually assaulted women and could get away with it because he is a rich celebrity as Trump “trying to look like he’s macho.”

A guy does something 11 years ago, it was a conversation in Hollywood where he’s trying to look like he’s macho. And 11 years after that they surface it from The Washington Post or whatever, bring it out within 30 days or so of the election and this is supposed to be the death blow and everybody writes him off…

Robertson went on to praise Trump’s performance in Sunday night’s debate, arguing that Trump was like the mythical Phoenix because he had performed well:

He’s like the Phoenix. They think he’s dead, he’s come back. And he came back strong. So, he won that debate.

Robertson’s faith in Trump, like his faith in Jesus, is misguided and ignorant. Trump’s ship is quickly sinking after being caught on tape bragging about how he can sexually assault women and get away with it because he is “a star.”

However, while the GOP presidential nominee is losing support from many prominent Republicans, many leading conservative Christians like Robertson continue to support a candidate who brags about sexually assaulting women and getting away with it.

Robert Jeffress, the pastor of First Baptist Church in Dallas and a member of Trump’s Evangelical Executive Advisory Board, admitted that Trump’s comments were “lewd, offensive, and indefensible,” but added that he’s still voting Trump. Because, you know, for conservative Christians, sexual assault ranks very low on their hierarchy of concerns.

After all is said and done, rape culture is a Christian thing.

Bottom line: Conservative Christians like Robertson and others have no real objection to a man who brags about sexually assaulting women. 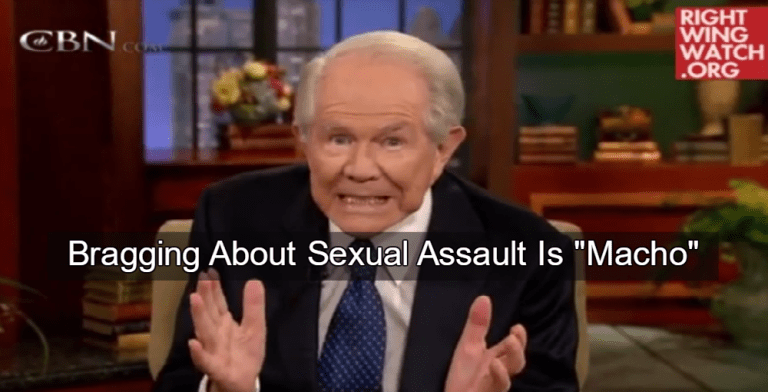