Ben Carson, a man willing to deny scientific truth to preserve religious superstition, is on his way to being the next Secretary of Education.

On Wednesday, BuzzFeed News published a list of names President-elect Donald Trump’s transition team has put together for cabinet positions. On that list was Ben Carson for Secretary of Education.

For the record, Carson is not qualified for the position. He has a well documented history of substituting religious superstition for scientific truth.

Carson rejects evolution and climate change, despite overwhelming scientific evidence to the contrary. Previously leading scientist and atheist Richard Dawkins referred to Carson as a “disgrace” for denying evolution.

Carson was once ridiculed after suggesting that if Noah could build an Ark, he could be president.

Bottom line: Carson is not qualified to be Secretary of Education, and if given the chance it seems certain he would exploit his position to promote his conservative Christian superstitions. 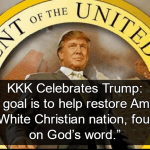