On Tuesday Oklahoma’s State Board of Health approved regulations for the anti-abortion signs.

The new signs will read:

There are many public and private agencies willing and able to help you carry your child to term and assist you and your child after your child is born, whether you choose to keep your child or to place him or her for adoption. The State of Oklahoma strongly urges you to contact them if you are pregnant.

The signs will also include a link to the Oklahoma Health Department’s website.

Huffington Post reports the anti-abortion group “Oklahomans for Life” sponsored the legislation behind the new sign mandate. Known as the “Humanity of the Unborn Child Act,” the legislation requires the state to work toward “achieving an abortion-free society” through information material, public service announcements and other media.

CBS reports that because the Legislature did not approve any funding for the signage, the new signs are projected to cost businesses a total of $2.3 million, and would be required by January 2018.

As one might expect, many are unhappy with the unnecessary, costly, and politically controversial mandate.

ABC reports groups representing hospitals and restaurants are among those complaining that the new requirements are an expensive, unfunded mandate from the Legislature. For example, in written comments provided to the Health Department, the Tulsa Campaign to Prevent Teen Pregnancy called the proposed regulations “completely unnecessary and unwanted” and said they would provide a significant financial burden on already stressed state agencies, including the departments of Health and Education.

It’s a waste of taxpayer money and this one even goes further because the cost is not just on the taxpayers back, it’s on small business. It’s very arbitrary, it’s very counter-productive because there’s no substance of evidence that these signs will help reduce the number of unwanted pregnancies.

Cox is right. The new mandate is counterproductive and a waste of money. If the state of Oklahoma wishes to prevent abortions, they should be spending their time and money promoting medically accurate, comprehensive sex education.

Indeed, if the state of Oklahoma was serious about their desire to prevent abortions, they would be spending their time and money providing access to birth control and women’s healthcare, rather than engaging in a petty culture war campaign in public restrooms.

Bottom line: Christian extremists should not be allowed to pollute public restrooms with their anti-women, religious bigotry. Public restrooms are no place to conduct anti-choice, forced-birth propaganda campaigns. The only sign that belongs in a public bathroom is a gentle reminder to wash one’s hands before exiting the facilities. 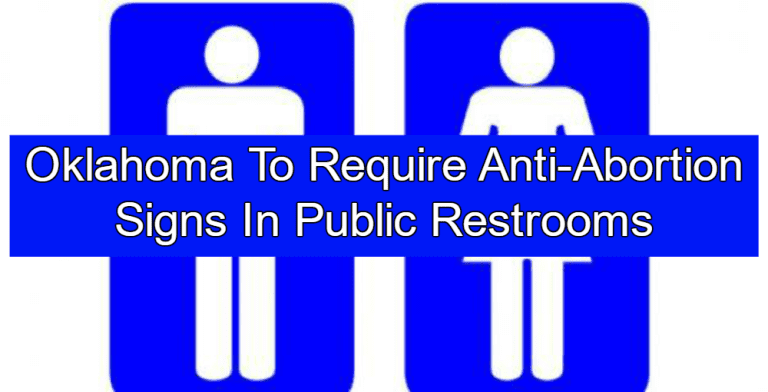