Dr. Ben Carson will be nominated as the next secretary of the Department of Housing and Urban Development, the Trump transition team announced Monday.

I am thrilled to nominate Dr. Ben Carson as our next Secretary of the US Department of Housing and Urban Development. Ben Carson has a brilliant mind and is passionate about strengthening communities and families within those communities. We have talked at length about my urban renewal agenda and our message of economic revival, very much including our inner cities. Ben shares my optimism about the future of our country and is part of ensuring that this is a Presidency representing all Americans. He is a tough competitor and never gives up.

I am honored to accept the opportunity to serve our country in the Trump administration. I feel that I can make a significant contribution particularly by strengthening communities that are most in need. We have much work to do in enhancing every aspect of our nation and ensuring that our nation’s housing needs are met.

Last month Carson said he would turn down a cabinet position in President-elect Donald Trump’s administration after reports circulated that he had been tapped for the position of either Secretary of Health and Human Services, or Secretary of Education.

At the time Carson’s spokesperson told The Hill:

However, in a post to his Facebook page last month, Carson hinted at the news that he would be the new HUD secretary, writing:

Winning the presidential election was only the first step for those who love traditional America and do not wish to fundamentally change it. Now the hard work begins of restoring the values that made us great. We must bring back the compassion and the unity that empowers us and banish the divisiveness that weakens us. After serious discussions with the Trump transition team, I feel that I can make a significant contribution particularly to making our inner cities great for everyone. We have much work to do in strengthening every aspect of our nation and ensuring that both our physical infrastructure and our spiritual infrastructure is solid. An announcement is forthcoming about my role in helping to make America great again.

Carson’s concern with the nation’s “spiritual infrastructure” is alarming, given his record as a Christian extremist willing to deny scientific truth in order to satisfy his religious superstitions.

For example, Carson rejects evolution and climate change, despite overwhelming scientific evidence to the contrary. Previously leading scientist and atheist Richard Dawkins referred to Carson as a “disgrace” for denying evolution. 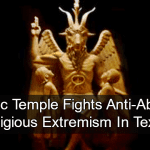