More of that Christian love: Catholic priest urges anti-Trump liberals to kill themselves.

Father Philip Pizzo, a Roman Catholic priest at the St. Benedict Joseph Labre Church in Queens, New York, is in hot water after posting a meme instructing anti-Trump protesters to commit suicide by jumping off a tall building.

The meme, posted to Father Pizzo’s Facebook page, contains an illustration of a man jumping off a skyscraper, and includes the following text:

Show your hate for Trump. Do it for social justice. #JumpAgainstTrump 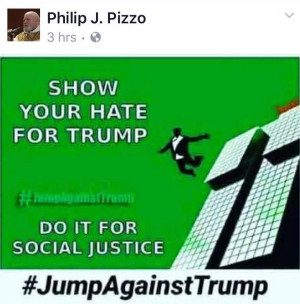 As one might imagine, the social media post has been widely condemned. However, Father Pizzo claims the “Jump Against Trump’’ meme was “funny.” Speaking to the NY Post, Pizzo insisted:

Despite Father Pizzo’s lame attempt to defend and justify the offensive post, the meme urging anti-Trump liberals to commit suicide has proven to be an embarrassment for the Catholic Church.

A rep for the Diocese of Brooklyn said the post does not reflect the church’s stance and has been removed.

“He says he intended it as satire only, regrets the offense it has caused and has deleted it. This post does not, in any way, represent the view of the church.”

In addition, the Diocese of Brooklyn issued the following statement via Twitter:

.@FatherPizzo regrets any offense he has caused. Suicide is a serious subject and his post does not at all represent the view of the church.

(.@FatherPizzo regrets any offense he has caused. Suicide is a serious subject and his post does not at all represent the view of the church.)

The irony is that while Father Pizzo defends and supports the white nationalism of Donald Trump, his congregation in Brooklyn is largely made up of recent immigrants and people of color.

Bottom line: Suicide is not funny. The fact that a supposedly “pro-life” priest would make a joke urging political opponents to commit suicide simply reveals the moral poverty of both the priest, and the church. 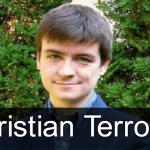 January 31, 2017 Christian Terrorist Bissonnette Kills Six at Quebec Mosque
Recent Comments
0 | Leave a Comment
Browse Our Archives
get the latest from
Progressive Secular Humanist
Sign up for our newsletter
POPULAR AT PATHEOS Nonreligious
1