Pastor Greg Locke is angry that people are donating to Planned Parenthood in his name.

A Christian pastor known for his hate filled rants against the transgender community and others is angry after people began to donate money to Planned Parenthood in his name.

On  a recent video aimed at his conservative Christian audience Locke explained that he did not support Planned Parenthood, and was angry that money to the organization that provided healthcare to women was receiving donations in his name.

On the video Locke declares:

I want everyone to know that pastor Greg Locke has absolutely positively totally nothing to do with Planned Parenthood and I don’t want my name associated with this wicked mess.

In the video Locke also takes some time to discuss his “bold and Biblical stand” against Planned Parenthood, making several ridiculous claims, including:

There has never been an organization in the world, that has killed more innocent people, other than radical Islam, than that of Planned Parenthood.

Locke’s video was widely shared on Reddit, with many Redditors making donations to Planned Parenthood in Locke’s name.

Readers are encouraged to follow the Planned Parenthood link and make a donation in Locke’s name, using the publicly available contact information from his church: 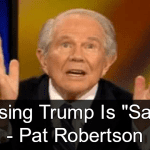