The Statesman reports the details of the new legislation:

The proposed legislation is an obvious attempt to satirize and draw attention to the unreasonable and dangerous policy proposals concerning women’s reproductive freedom coming from the Republican Party.

Bottom line: Turnabout is fair play. The proposed legislation demonstrates the absurdity and cruelty of the constant and ongoing effort by Republicans to demean and stigmatize women in their pursuit of reproductive health care. 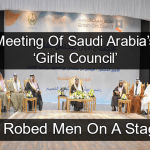 March 14, 2017 Saudi Arabia Launches Girls Council Without Any Girls
Recent Comments
0 | Leave a Comment
"And JC said, starve the little chidren, for as much as you do it unto ..."
David Cromie Fox News Guest: Children Don’t Deserve ..."
""....are there no work houses....""
Erik1986 Fox News Guest: Children Don’t Deserve ..."
"Tsarist Russia was anything but a free market, and neither was the aristocratic system in ..."
Person223 Fox News Guest: Children Don’t Deserve ..."
"The right of males to reproduce, rendering a woman's reproductive organs chattel, disregarding the whole ..."
Anon E Moss New Legislation In Tennessee Would Allow ..."
Browse Our Archives
get the latest from
Nonreligious
Sign up for our newsletter
POPULAR AT PATHEOS Nonreligious
1