Theocracy alert: A large fundamentalist Christian church in Alabama is set to have its very own police force. Say “Hello” to the American Taliban.

The Alabama Senate has voted to allow a church to form its own police force.

The church says it needs its own police officers to keep its school as well as its more than 4,000 person congregation safe.

Senate Bill 193, would specifically authorize the Briarwood Presbyterian Church, which has more than 4,000 members, to hire its own police force that would be “invested with all of the powers of law enforcement officers in this state.”

Last month the Senate Judiciary Committee approved the bill that would authorize Briarwood Presbyterian Church to employ its own police force.

Experts say a church with its own police department would be unprecedented in the U.S.

Critics worry embarrassing crimes like the sexual abuse of children and others, as well as illegal drug use, would be covered up by a police force loyal to the church rather than the law.

It’s making the church take the role of the government. I would expect that if the law is enacted it would not be very long before it is challenged.

Indeed, it seems certain that a church-only police force raises constitutional questions that would and should be subject to immediate legal challenge.

Writing for the The Anniston Star, Tim Lockette reports:

Similar bills have failed in earlier years. Critics said those bill would have violated church-state separation, while creating a police force that isn’t answerable to elected officials. Senators on Wednesday didn’t bring up the church-state issue explicitly, but did question the accountability of the police force.

I don’t want this to be a little secret group that, when something happens, it gets covered up.

I’ve never even heard of this. From the perspective of security, churches usually have relationships with the local police departments. I don’t know why that wouldn’t be sufficient.

Bottom line: A fundamentalist Christian church, or any other church, having it’s very own police force is a terrifying prospect. More important, for a church to have it’s own police force is a slap in the face to the U.S. Constitution, and a terrible betrayal of the secular values upon which this country was founded.

(Large portions of this article were previously published here.) 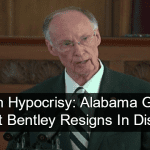