NBC 5 reports that their news crew “saw a large number of federal agents walking in and out of the offices with boxes.”

Today, we are here on official business, we are conducting a search warrant on the premises, basically that’s all I can tell you today.

Hinn, 64, is a controversial televangelist and a fraud who claims to heal, speak in tongues, and perform miracles, all the while convincing gullible and vulnerable Christians to send him money in hopes of a miracle.

Hinn was the subject of a 2007 U.S. Senate inquiry that looked into the spending of six televangelists. Sen. Chuck Grassley, R-Iowa, questioned the personal use of church-owned airplanes, luxury homes and credit cards by pastors and their families, but there was no definitive finding of wrongdoing when the investigation ended in 2011.

Benny Hinn is an Israeli televangelist, best known for his regular “Miracle Crusades”—revival meeting or faith healing summits that are usually held in stadiums in major cities, which are later broadcast worldwide on his television program, This Is Your Day.

According to Hinn’s website, he is currently in Paris.

In the end, Benny Hinn is a moral monster who preys on the weak minded. In addition to being a snake oil salesman, it looks like the prosperity gospel preacher is also a crook. 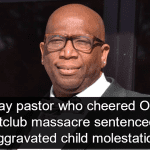 April 26, 2017
Pastor Who Celebrated Orlando Massacre Gets 35 Years For Child Molestation
Next Post 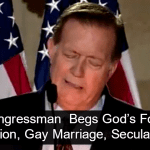 April 27, 2017 Crying Congressman Begs God To Forgive U.S. For Abortion, Gay Marriage, Secular Schools
Recent Comments
0 | Leave a Comment
"And JC said, starve the little chidren, for as much as you do it unto ..."
David Cromie Fox News Guest: Children Don’t Deserve ..."
""....are there no work houses....""
Erik1986 Fox News Guest: Children Don’t Deserve ..."
"Tsarist Russia was anything but a free market, and neither was the aristocratic system in ..."
Person223 Fox News Guest: Children Don’t Deserve ..."
"The right of males to reproduce, rendering a woman's reproductive organs chattel, disregarding the whole ..."
Anon E Moss New Legislation In Tennessee Would Allow ..."
Browse Our Archives
get the latest from
Nonreligious
Sign up for our newsletter
POPULAR AT PATHEOS Nonreligious
1