Pastor Keith Gomez, who leads the Northwest Bible Baptist Church in Elgin, Illinois, wants everyone to know that slavery was not really a bad thing, and that it actually helped African Americans escape Africa.

In a recent sermon Gomez argued slavery was a good thing, because: “If it wasn’t for slavery, those folks would still be in Africa with a bone in their nose…”

The following is an excerpt from Pastor Gomez’s racist remarks on slavery:

… we’re talking about 13 books in the Bible, Romans through Philemon. You ought to write that down. I could really shake you up now, but I don’t know if I oughta wake you up that bad… when you get in the Pauline — are y’all listening to me? — when you get into the Pauline epistles, you’re getting in the doctrine. So why would you get in Philemon when he’s trying to teach you how to treat your slave?… If they should be slaves.

[Makes a fake snoring sound] So you wanna go to sleep?

See, what you wanna do is turn in to TBN [Trinity Broadcasting Network] and listen to them odd birds who don’t know doctrine whatsoever. And then you hate slavery because we were taught to hate that. Because we’re so nasty.

And some of you little whities can’t get it either. If it wasn’t for slavery, those folks would still be in Africa with a bone in their nose fighting lions, and if you don’t like that, you can lump it any way you want. That ain’t a prejudice. That is factual and historical.

Pastor Gomez is wrong on too many levels too count. The overt and unapologetic racism is only the start of this sorry man’s ethical and metaphysical confusion.

The phrase “some of you little whities can’t get it either” is simply beautiful in its profound absurdity.

In fact, the whole rant is a malicious and dangerous slander that is popular with many fundamentalist Baptists. For example, Pastor Steven Anderson gave a similar sermon last year in which he defended slavery “because the Bible’s always right.”

In a twisted sermon uploaded to YouTube, Pastor Anderson of Faithful Word Baptist Church defended the institution of slavery as presented in the Bible “because the Bible’s always right about every subject.”

At the time, the passionate Baptist pastor explained to his gullible congregation why his Christian faith demands that he accept the righteousness of slavery as presented in the Bible:

People will try to come at us — usually atheists or people like that — they’ll come at us and say, “Well, the Bible is wrong because the Bible condones slavery.” We’ve all heard that before, right?

But here’s the thing about that, is that if the Bible condones slavery, then I condone slavery. Because the Bible’s always right about every subject…

Both Pastor Anderson and Pastor Gomez illustrate an insoluble moral dilemma when it comes to Christianity. The Bible, both Old Testament and New Testament, operate under the faulty moral assumption that slavery is OK. Thus, when you accept the Bible as the Word of God, you are stuck defending slavery.

Many moderate Christians are dishonest, and simply ignore or reinterpret the explicit, pro-slavery messages central to Christianity. Others, like Gomez and Anderson, are at least honest in recognizing that slavery is Biblical, and thus approved by God.

However, by defending slavery, fundamentalists reveal that both they and their God are unethical, moral monsters. Meanwhile, the cowardly moderates quietly look the other way and ignore the Bible, while claiming that the fundamentalists aren’t “true Christians.” 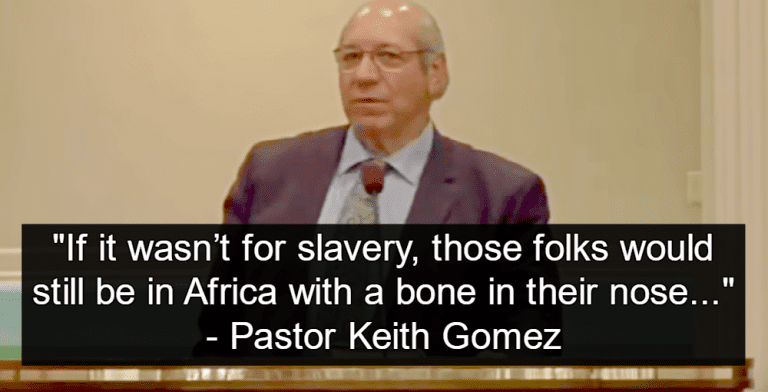 May 30, 2017
Christian Congressman Not Sure If All Americans Are Entitled To Eat
Next Post 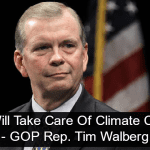 May 31, 2017 GOP Congressman: God Will Take Care Of Climate Change
Recent Comments
0 | Leave a Comment
"Tippling Philosopher is widely regarded as perhaps the best Patheos non religious blogs."
Geoff Benson Fox News Host Bill Hemmer Warns ..."
"Reminds me of condemnations of rock-&-roll by Southern Baptists (& other like-minded fundies) back in ..."
Georgia Sam Pentecostal Christians Are Burning Australia’s Sacred ..."
"I am called a bigot, a fool, referred to as "my kind", "nigerian white supremacist ..."
MrPeach Texas Governor: ‘The Problem is Not ..."
"you sure can run your mouth here, now explain your downvote to my harmless comment. ..."
Joshua Booker Million MAGA March: Militias, Proud Boys, ..."
Browse Our Archives
get the latest from
Progressive Secular Humanist
Sign up for our newsletter
POPULAR AT PATHEOS Nonreligious
1