Prayers are not the answer. In fact, prayers are the problem. While some pray for Manchester after the attack that left twenty-two people dead and 59 injured, others celebrate.

The bitter truth is that the Islamic State and her supporters celebrate the mass killing as an answer to their prayers, and a victory for their jihad.

For the Islamic State, and those extreme Muslims who support ISIS, the horrific death and destruction at the end of a concert by singer Ariana Grande at Manchester Arena serves as a validation of their faith.

Perhaps even more damning, those Christians and moderate Muslims who are praying for the victims of the terrorist attack in Manchester are praying to the same God, the God of Abraham, that the Islamic extremists who celebrate the attack supposedly worship.

The uncomfortable truth is the God that both terrorists and non-terrorists alike beseech with their prayers is useless, or worse.

The uncomfortable truth that many simply cannot accept is that God most probably  does not exist, and that prayers are ultimately futile gestures expressing existential desperation and metaphysical confusion.

If not prayer, if not religion, what are we to do?

Instead of prayer we must stand against religious extremism. To defy the terrorists we must embrace our shared humanity. We must rise above the religious superstitions that divide us. We must be honest with ourselves and our communities.

In addition, we all must be willing to confront the challenge of Islamic extremism without demonizing individual Muslims, and without making excuses for the horror and terror committed in the name of Islam.

We must challenge the hypocrisy of so-called progressives who will rail against a Christian extremist refusing to give a marriage license to a same-sex couple in Kentucky, but will remain silent while gays and lesbians are executed in the name of Islam in the Middle East.

Whether it be Muslim extremists hating the freedom and liberalism of the West, or Christian politicians trying to bring theocracy to America, there’s a lot of hate, bigotry, and ignorance that comes with following ancient and discredited dogma.

We must transcend that hate.

Bottom line: Religion divides us. We must reject religious extremism, and embrace our common humanity.

(Large portions of this post were previously published here) 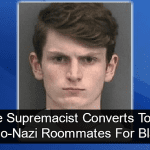 May 22, 2017
White Supremacist Converts To Islam, Kills Neo-Nazi Roommates For Blasphemy
Next Post