GOP Congressman: ‘Nobody Dies Because They Don’t Have Access To Healthcare’

GOP Congressman: ‘Nobody Dies Because They Don’t Have Access To Healthcare’ May 6, 2017 Michael Stone

An Idaho town hall erupts in outrage after a Republican congressman claims “nobody dies because they don’t have access to health care.”

Idaho Rep. Raul Labrador (R-Idaho) drew immediate and intense criticism after telling a crowded town hall that nobody dies due to lack of access to health care.

At a town hall meeting Friday Labrador tried to defend the GOP’s ObamaCare repeal plan. It did not go well.

During the town hall meeting at Lewis-Clark State College in Lewiston, Idaho,

Labrador responded to concerned woman in the audience who was worried that the loss of health care protection under Medicaid would result in deaths, declaring:

You are mandating people on Medicaid accept dying. You are making a mandate that will kill people.

The Republican congressman immediately interrupted the woman’s question and defended the new TrumpCare legislation by declaring:

That line is so indefensible. Nobody dies because they don’t have access to health care.

At that, the crowd went crazy, booing and jeering the ignorant congressman.

Labrador, a member of the conservative House Freedom Caucus, made his regrettable comments only a day after the U.S. House passed the draconian Trumpcare legislation that is meant to repeal and replace large parts of Obamacare.

The House narrowly passed Trumpcare, also known as the American Health Care Act, by a 217-213 vote. No Democrats backed the bill, and 20 Republicans broke ranks to oppose it.

Labrador was not one of the few Republicans who opposed the legislation.

The new Republican backed legislation is truly monstrous, and would even allow states to deny coverage for pre-existing conditions, including rape, sexual assault, and domestic violence.

As for being jeered at town hall meetings, Raw Story reports Labrador received similar treatment in April when he told a town hall audience that he doesn’t believe healthcare is a “basic human right.”

Bottom line: Republicans are happy to deny Americans health care, and they are willing to tell the most outrageous lies to justify their cruelty. And if you do die for lack of health care, it’s probably because you deserved it anyway.

May 6, 2017
Stephen Fry Investigated By Irish Police For Blasphemy After Mocking God
Next Post 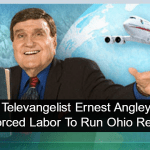