Call it the “Trump Effect” – A recent rise in “evangelizing and religious bigotry” from Christian extremists in the U.S. armed forces constitutes a “national security threat” according to military experts.

According to the report, the election of Donald Trump “has led to such a steep rise in fundamentalist Christian evangelizing and religious bigotry in the U.S. armed forces that the matter is reaching the level of a ‘national security threat.’”

According to the Military Religious Freedom Foundation (MRFF), the number of complaints from servicemen and women in the U.S. military have “doubled in number since November 2016.”

Military family and marital therapy programs are being infused with Protestant Christianity, which would violate the U.S. Constitution; open anti-Semitism; anti-LGBT statements, posters, symbols and bullying; openly anti-Muslim teachers and Islamophobic attacks; a rise in on-base evangelizing; and increased pressure on recruits or lower-level personnel and service members to convert to fundamentalist Christianity.

With the advent of Trump as the commander in chief of our armed forces, MRFF has experienced a massive influx of new military and civilian personnel complaints of religion-based prejudice and bigotry, most of them coming from non-fundamentalist Christians being persecuted by their military superiors for not being “Christian enough.

Newsweek points to a particularly egregious example of Christian extremism in the U.S. military inspired by Trump:

.. noncommissioned officers at one Air Force base reported that their superiors told them Trump would make it USAF policy that in order for “disbelieving Jews” to be allowed into the USAF or deemed fit for promotions, they would have to show via objectively established behavior that they were at least honestly “considering the truth of the Gospel of Jesus Christ.”

And another egregious example:

the wife of a combat-decorated Muslim U.S. Naval officer, who was wearing a Muslim headscarf, was surrounded in the commissary and spit upon and cursed as not being a “true American and being a spy and a terrorist.” She was with her children at the time.

The Trump Effect – i.e. the rise in religious bigotry and unwanted evangelizing from Christian extremists in the U.S. armed forces – should come as no surprise. As a presidential candidate, Trump promised “to end political correctness and put Christianity back into the military.”

More from the report on the dangerous Christian extremists currently serving in the U.S. military:

Fundamentalist views are decidedly in the minority in the general population, but they have adherents in some of the U.S. military’s most powerful positions, especially in and around Washington, D.C., and in Colorado Springs, home of the U.S. Air Force Academy and the nation’s nuclear command center.

The U.S. military has long been seeded with radical Christian fundamentalists—sometimes called Christian Dominionists or Christian Reconstructionists—who believe a “Warrior Jesus” has their backs while they fight against Islam. They believe they are establishing a “Kingdom of God” on earth, starting with the United States, and are predictably anti-LGBT and unfriendly to females among their ranks.

Bottom line: In the age of Trump, Christian extremists in the U.S. military now constitute a “national security threat.”

May 23, 2017
Don’t Pray For Manchester - Reject Religious Extremism
Next Post 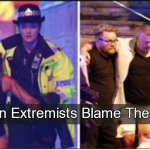 May 24, 2017 Christian Extremists Blame Victims Of Manchester Arena Bombing
Recent Comments
0 | Leave a Comment
Browse Our Archives
get the latest from
Progressive Secular Humanist
Sign up for our newsletter
POPULAR AT PATHEOS Nonreligious
1