President Trump will sign an executive order on religious freedom that will give individuals and organizations a license to discriminate against women and LGBT Americans.

Multiple media outlets are reporting that Trump will sign a draconian Executive Order – “Establishing a Government-Wide Initiative to Respect Religious Freedom” – on Thursday, to coincide with the National Day of Prayer.

The draft order seeks to create wholesale exemptions for people and organizations who claim religious or moral objections to same-sex marriage, premarital sex, abortion, and trans identity, and it seeks to curtail women’s access to contraception and abortion through the Affordable Care Act.

The leaked Executive Order explicitly offers legal protection to any tax-exempt organization that:

…believes, speaks, or acts (or declines to act) in accordance with the belief that marriage is or should be recognized as the union of one man and one woman, sexual relations are properly reserved for such a marriage, male and female and their equivalents refer to an individual’s immutable biological sex as objectively determined by anatomy, physiology, or genetics at or before birth, and that human life begins at conception and merits protection at all stages of life.

Commenting on the story, a White House official told The New York Post:

The order is being reviewed by lawyers and is the product of months of conversations between conservative lawmakers, religious groups and the Trump administration.

As one might expect, civil rights groups plan to challenge the executive order in court if Trump sign it.

We are ready to sue if they do something that authorizes discrimination. If Trump signs an order like the one that we saw a couple months ago, it would violate the Equal Protection Clause of the 14th Amendment and the Establishment Clause of the First Amendment.

If signed, Trump’s Executive Order on religious freedom would give people and organizations who claim religious objections to same-sex marriage, premarital sex, abortion, and transgender identity, a license to discriminate. As such, it is a deeply flawed and mean-spirited attempt to give conservative Christians permission to hurt those people they do not like. 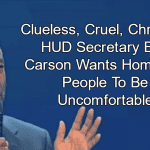 May 3, 2017
Ben Carson: Homeless Shelters Shouldn’t Be ‘Comfortable’
Next Post

May 4, 2017 Under Trumpcare Rape and Domestic Abuse are Excludable Pre-Existing Conditions
Recent Comments
0 | Leave a Comment
Browse Our Archives
get the latest from
Progressive Secular Humanist
Sign up for our newsletter
POPULAR AT PATHEOS Nonreligious
1