The Texas governor signed a law on Thursday to protect the religious rights of faith-based groups in state child welfare programs, but critics said it could be used to discriminate against LGBT and non-Christian families in adoptions.

The legislation, House Bill 3859, forbids government agencies or contractors from taking “adverse action” against an agency that “has declined or will decline to provide, facilitate, or refer a person for child welfare services that conflict with, or under circumstances that conflict with, the provider’s sincerely held religious beliefs.”

In other words, publicly funded agencies in Texas will be free to discriminate against non-Christians and any other “undesirables” who fail to conform to the dictates of conservative Christianity.

This law’s clear intent is to allow service providers that receive state tax dollars to misuse religion as a license to discriminate against LGBT families and children in the state’s child-welfare system.

Lawmakers used religion as a weapon to pass a bill that not only harms qualified candidates who want to start families, but children. This law was never about the best interests of Texans or of children, but about forwarding a political agenda to codify the permission to discriminate against LGBTQ Texans into state law. Discrimination has won in Texas, and it saddens me that a child can now be denied the chance to live with a deserving family simply because they are LGBTQ.

Bottom line: In Texas, Christian theocracy is being written into the law. And, as always, it will be the children who suffer. 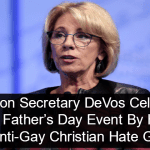 June 16, 2017 DeVos Celebrates Father’s Day With Christian Hate Groups
Recent Comments
0 | Leave a Comment
Browse Our Archives
get the latest from
Progressive Secular Humanist
Sign up for our newsletter
POPULAR AT PATHEOS Nonreligious
1