Christian Sharia: Modesty police in the the Republican controlled House of Representatives are enforcing a new dress code for women.

The Christian puritans are at the helm, and the bare arms of women must not be seen in the U.S. House of Representatives.

According to a report filed by CBS, sleeveless dresses and blouses worn by women are no longer acceptable attire in the House chamber and the Speaker’s lobby, a location where reporters often wait for lawmakers in order to conduct brief interviews.

A senior GOP source told CBS News that House chamber security and the House Sergeant at Arms are enforcing new rules regarding proper attire for women entering the House chamber and the Speaker’s lobby, effectively becoming modesty police for the U.S. House of Representatives.

When I was kicked out that day, I was just trying to pass through the area to reach another hallway, but I was told I was violating the rules. They offered to find a sweater for me to put on, so it wasn’t some tyrannical end of free press, but I opted to just go around instead. But recently they’ve been cracking down on the code, like with open-toed shoes. I suspect the rules are being emphasized now that it’s summertime and excruciatingly hot outside and everyone is dressing for the weather. 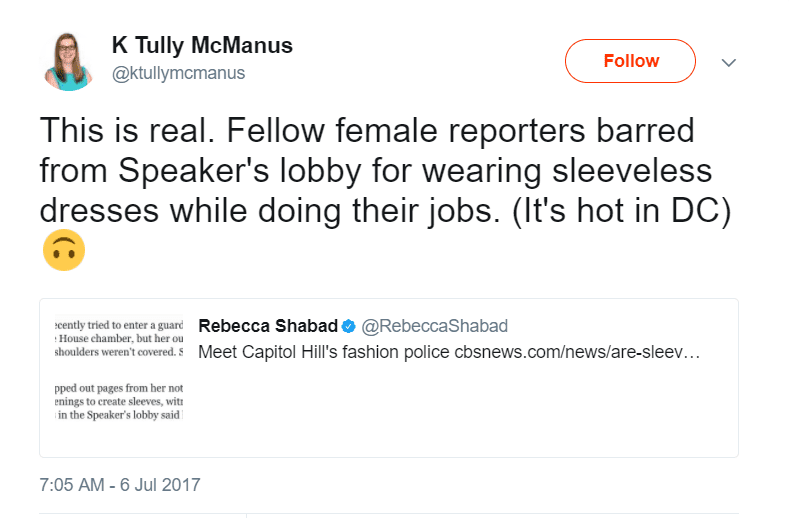 The actual House dress code rule only states that women must wear “appropriate attire.” However, under the direction of Speaker of the House Paul Ryan, the vague dress code is being used to harass and frustrate female reporters wishing to conduct interviews and report on the goings on in the House of Representatives.

The good news: Raw Story reports that the new modesty policy for women in the House of Representatives is not shared by either the Senate or the White House. At least not yet.
Bottom line: Under the direction of Speaker of the House Paul Ryan, the Republican controlled House of Representatives is enforcing a new dress code for women. No doubt the Taliban would approve.

July 7, 2017 Catholic Controlled El Salvador Jails Raped Teen For 30 Years After Stillbirth
Recent Comments
0 | Leave a Comment
Browse Our Archives
get the latest from
Progressive Secular Humanist
Sign up for our newsletter
POPULAR AT PATHEOS Nonreligious
1