Ann Coulter claims God punishing Houston for electing a gay mayor is a “more credible” cause for Hurricane Harvey than climate change.

I don’t believe Hurricane Harvey is God’s punishment for Houston electing a lesbian mayor. But that is more credible than “climate change.” https://t.co/K7d7mopY5Q

I don’t believe Hurricane Harvey is God’s punishment for Houston electing a lesbian mayor. But that is more credible than “climate change.”

The following is a brief excerpt from the Politico article titled “Harvey Is What Climate Change Looks Like,” the article that made Coulter angry:

Climate change is making rainstorms everywhere worse, but particularly on the Gulf Coast. Since the 1950s, Houston has seen a 167 percent increase in the frequency of the most intense downpours. Climate scientist Kevin Trenberth thinks that as much as 30 percent of the rainfall from Harvey is attributable to human-caused global warming. That means Harvey is a storm decades in the making.

While Harvey’s rains are unique in U.S. history, heavy rainstorms are increasing in frequency and intensity worldwide. One recent study showed that by mid-century, up to 450 million people worldwide will be exposed to a doubling of flood frequency. This isn’t just a Houston problem. This is happening all over.

The article is a nice discussion of climate change in the context of Hurricane Harvey,  and the danger of climate science deniers like Coulter.

As for Coulter’s suggestion that Hurricane Harvey may be “God’s punishment” for Houston electing a lesbian mayor, this is a common refrain from conservative Christians.

If you’re going to attribute the flooding in Texas to some kind of supernatural cause, you can make a geographical connection between the flooding and the practice of the occult and witchcraft and the embrace of homosexuality.

That’s where the disaster is being felt the worse.

This latest tweet is just one of Coulter’s many anti-LGBT comments, as she has claimed “homosexual behavior” should be “discouraged” as a public health risk and also said “[gay] marriage is not a civil right.” 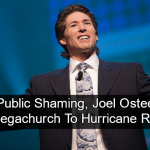 August 29, 2017 Osteen Asks for $50 Minimum Donation for Helping Hurricane Victims
Recent Comments
0 | Leave a Comment
Browse Our Archives
get the latest from
Nonreligious
Sign up for our newsletter
POPULAR AT PATHEOS Nonreligious
1