Making a passionate and well reasoned case for putting an end to marijuana prohibition, Booker, the former mayor of Newark, announced his new legislation via Facebook:

For decades, the failed War on Drugs has locked up millions of nonviolent drug offenders—especially for marijuana-related offenses—at an incredible cost of lost human potential, torn apart families and communities, and taxpayer dollars. The effects of the drug war have had a disproportionately devastating impact on Americans of color and the poor.

Today I’m introducing the Marijuana Justice Act, a bill that if passed will legalize marijuana at the federal level and go even further in an effort to remedy many of the failures of the War on Drugs. This is the right thing to do for public safety, and will help reduce our overflowing prison population.

In a statement, Tom Angell, head of the pro-legalization Marijuana Majority, said:

This is the single most far-reaching marijuana bill that’s ever been filed in either chamber of Congress. More than just getting the federal government out of the way so that states can legalize without DEA harassment, this new proposal goes even further by actually punishing states that have bad marijuana laws.

Vox reports the legislation would be retroactive:

The legislation would also be retroactive, so it would automatically expunge federal marijuana use and possession crimes from people’s records and let those currently serving time in prison for marijuana use or possession petition for resentencing. And it’d create “a community reinvestment fund” that Booker’s office said would go toward job training, reentry services, and community centers, among other programs.

However, it is almost certain that Republicans in the Trump administration will oppose Booker’s Marijuana Justice Act. Associated Press reports:

The legislation comes in the face of U.S. Attorney General Jeff Sessions’ stiff opposition to the drug. Sessions has said he wants to crack down on the drug even as a growing number of states legalize it.

Indeed, earlier this year Sessions claimed that “dependency” on marijuana is “only slightly less awful” than heroin while appearing before local, state, and federal law enforcement officials in Richmond, Virginia.

At the same appearance Sessions went on to suggest that America should return to the Nancy Reagan-style, “Just say no,” abstinence policies of the 1980s and ’90s.

(For the record, Sessions is an idiot. Comparing marijuana to heroin is not only stupid, it’s dangerous. There is absolutely no comparison between the highly addictive and destructive nature of heroin and the relatively mild nature of cannabis. To suggest the two are nearly equivalent may lead some who have tried marijuana with no ill effect to try heroin, with potentially disastrous and unforeseen consequence.)

Currently, eight states and the District of Columbia have some form of legalized marijuana. However, most political observers agree that Booker’s Marijuana Justice Act has little chance of becoming law. Politico notes:

The New Jersey Democrat’s bill, called the Marijuana Justice Act, has virtually no chance of passage in the Republican-controlled Congress and in a presidential administration that’s decidedly anti-marijuana.

Yet despite Republican opposition to marijuana legalization, a majority of Americans favor putting an end to the prohibition on cannabis. Vox reports: 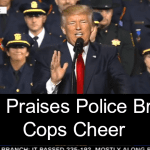