Terry Heaton, a former 700 Club producer, spoke with VOX about working with the famous televangelist while promoting his new book, a scathing report concerning Robertson’s greed and political malice titled “The Gospel of the Self: How Jesus Joined the GOP.”

At one point in the interview, Heaton shares an anecdote about Robertson’s greed, and his eagerness to hustle the gullible rubes watching him on television:

We had this idea to do a series featuring a guy who always got things wrong so that Pat could then come on afterward and tell people what to do right. So we developed a new segment: The conceit was a character who always did things ‘wrong\’ so Pat could come out and teach him.

The pilot was a guy who was constantly losing money because he was trying to give his way out of debt. So he’d look at the Bible where it says ‘you receive a hundredfold for what you give,’ and if he was a $1,000 in debt he’d give away $100 expecting to be able to pay off the debt,” he continued. “And at the end, he turns to the camera and says, ‘What am I doing wrong?’ And we all thought it was brilliant.

However, Robertson firmly rejected any notion of educating his viewers, or promoting common sense, if it would impact his finances. Rejecting the suggestion to offer his viewers some legitimate financial education, Robertson declared:

You put that on the air and you will cost this ministry millions.

The former producer also explained how the 700 Club quietly began to abandon the teachings of Jesus, and instead used sex, and sex-negative politics, to titillate viewers and build ratings:

It turns out that abortion, gays and lesbians, and birth control — they’re all about sex. Sex, more than everything else, scares people who want their children to be safe and to live in a sanctified world. I don’t want to overstate that, but it’s the truth.

Yes, it worked. In 2016, following the advice of Robertson and other conservative Christians, 81 percent of evangelicals voted for Donald Trump.

More about Heaton’s  The Gospel of the Self: How Jesus Joined the GOP:

The bitter political and religious divides we see today in America have roots that go back many decades. The televangelist Pat Robertson was one of the first to determine how battlelines were drawn. Robertson, now a leading and unflinching Trump supporter, rose to national prominence in the 1960s with his Christian Broadcasting Network and his hit show The 700 Club. Terry Heaton, who worked alongside Robertson at The 700 Club and became its executive producer, provides the inside story of how evangelical Christianity forced itself on a needy Republican Party in order to gain political influence on a global level. Using deliberate and strategic social engineering, The 700 Club moved Christians steadily into the Republican Party–and moved the party itself to the right. With a gospel message that appealed to self-interest, The 700 Club violated numerous laws in an attempt to create a Shadow Government of Evangelicals, all in the name of doing God’s work on earth. The results of this longterm campaign were fully on display in the 2016 electoral season.

Bottom line: No surprise here. This new report only confirms what many have long suspected: Pat Robertson is more concerned with money than Jesus.

August 26, 2017
Evangelicals Try To Pray Hurricane Harvey Away, And Fail
Next Post 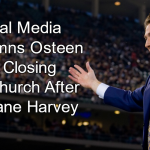 August 28, 2017 Joel Osteen Closes Church After Hurricane, Tells Members To Pray
Recent Comments
0 | Leave a Comment
"Characters and stories from the bible have already been cancelled. By christians who chose which ..."
creativerealms Fox News Host Bill Hemmer Warns ..."
""follow my rules or burn for ever" ----- That's NOT what the Bible says."I agree, ..."
Mark Bradshaw Ana Kasparian’s Glorious Rant On Christianity ..."
"They're blaming the Democrats for banning Dr Seuss and posting warnings about Sesame Street etc.Of ..."
Jim Jones Fox News Host Bill Hemmer Warns ..."
"I agree, but the question is a translation issue, not an interpretation issue so my ..."
Kit Hadley-Day Ana Kasparian’s Glorious Rant On Christianity ..."
Browse Our Archives
get the latest from
Progressive Secular Humanist
Sign up for our newsletter
POPULAR AT PATHEOS Nonreligious
1