The EPA is accused of scientific censorship after preventing leading agency scientists from speaking at a climate change conference.

The Environmental Protection Agency has canceled the speaking appearance of three agency scientists who were scheduled to discuss climate change at a conference on Monday in Rhode Island, according to the agency and several people involved.

The Environmental Protection Agency is drawing heat for pulling its scientists from a panel discussion Monday in Rhode Island as part of a conference spotlighting the effects of climate change on the Narragansett Bay.

The conference where the scientists were scheduled to speak is coinciding with the release of a report showing the threats of climate change to Narragansett Bay, the 196- square-mile estuary whose watershed encompasses 1,705 square miles with more than 100 towns and cities that are home to nearly 2 million people.

Narragansett Bay is one of Rhode Island’s most important economic assets and the EPA won’t let its scientists talk with local leaders to plan for its future. Whatever you think about climate change, this kind of collaboration should be a no-brainer. Muzzling our leading scientists benefits no one.

John King, an oceanographer who works on the Narragansett Bay Estuary Program, called the move “a blatant example” of “scientific censorship” while speaking with New York Magazine:

It’s definitely a blatant example of the scientific censorship we all suspected was going to start being enforced at EPA. They don’t believe in climate change, so I think what they’re trying to do is stifle discussions of the impacts of climate change.

The three agency scientists being prevented from speaking at the conference contributed to a 500-page report on the state of the bay, which was issued Monday. More on that report from Slate:

The report concluded that climate change is causing air and water temperatures to warm, precipitation to change in “intensity and seasonality,” and sea levels to rise. “These stressors are already causing ecological responses,” the report reads. “Impacts of climate change on the cities, towns, and ecosystem of Narragansett Bay are projected to intensify, such as increased flooding and erosion of coastal properties, loss of salt marshes, and potentially more beach closures due to pathogens.”

Bottom line: Scott Pruitt, the current director of the Environmental Protection Agency (EPA), is a dangerous Christian extremist, and an anti-science climate-change denier who advocates for bible distribution in public schools. He is also willing to censor scientists if they dare speak out on the subject of climate change. 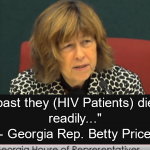 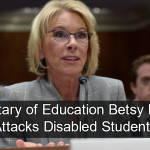