Leading psychiatrists warn President Donald Trump is “dangerously mentally ill” and “presents a clear and present danger to the nation.”

However, the extreme and deeply troubling case of President Donald Trump has prompted many leading mental health professionals to break their silence and warn their fellow Americans of the clear and present danger posed by the nation’s 45th president.

In a new, detailed report released earlier this week, 27 of the nation’s leading psychiatrists and mental health experts assess the mental stability of President Trump. The consensus: Trump is dangerously mentally ill and presents a clear and present danger to the nation.

The report, titled The Dangerous Case of Donald Trump: 27 Psychiatrists and Mental Health Experts Assess a President, is a 384 page analysis of Trump’s mental illness, and the peril his illness poses for the nation:

In THE DANGEROUS CASE OF DONALD TRUMP, twenty-seven psychiatrists, psychologists, and other mental health experts argue that, in Mr. Trump’s case, their moral and civic “duty to warn” America supersedes professional neutrality. They then explore Trump’s symptoms and potentially relevant diagnoses to find a complex, if also dangerously mad, man.

Philip Zimbardo and Rosemary Sword, for instance, explain Trump’s impulsivity in terms of “unbridled and extreme present hedonism.” Craig Malkin writes on pathological narcissism and politics as a lethal mix. Gail Sheehy, on a lack of trust that exceeds paranoia. Lance Dodes, on sociopathy. Robert Jay Lifton, on the “malignant normality” that can set in everyday life if psychiatrists do not speak up.

The report details not only Trump’s mental illness, but the damage his illness is doing to the collective and individual mental health of American citizens. Referencing “the cult-like characteristics of his followers,” the report explores the damaging consequences for mental health the Trump presidency is causing across the country.

In relation to the new report, more than 60,000 mental health professionals have signed a petition stating Trump “manifests a serious mental illness” and as such, he should “be removed from office.” The petition states:

We, the undersigned mental health professionals, believe in our professional judgment that Donald Trump manifests a serious mental illness that renders him psychologically incapable of competently discharging the duties of President of the United States. And we respectfully request he be removed from office, according to article 4 of the 25th amendment to the Constitution, which states that the president will be replaced if he is ‘unable to discharge the powers and duties of his office.’

Bottom line: The nation’s leading psychiatrists and mental health professionals confirm what many have long suspected, Donald Trump is “psychologically incapable of competently discharging the duties of President of the United States,” and, as such, he must he “be removed from office.”

Watch: Experts discuss why President Trump is psychologically unfit to serve the country, how he is dangerous, and why this is not a partisan matter, but, rather, a patriotic defense of democracy and our citizens – 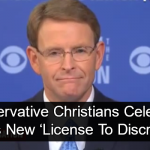