Roy Moore, the GOP Senate candidate in Alabama, is a dangerous religious extremist that wants to make gay sex illegal and turn the U.S. into a Christian theocracy.

Confirming the fact that Moore is a deplorable human being and distinctly unqualified to serve as an elected official in any capacity, Talking Points Memo reports that late last year the candidate declared that the Supreme Court’s decision legalizing gay marriage was “even worse” than the notorious 1857 Dred Scott ruling that upheld slavery.

In 1857 the United States Supreme Court did rule that black people were property. Of course that contradicted the Constitution, and it took a civil war to overturn it. But this ruling in Obergefell is even worse in a sense because it forces not only people to recognize marriage other than the institution ordained of God and recognized by nearly every state in the union, it says that you now must do away with the definition of marriage and make it between two persons of the same gender or leading on, as one of the dissenting justices said, to polygamy, to multi-partner marriages.

We’ve got to go back and recognize that what they did in Obergefell was not only to take and create a right that does not exist under the Constitution but then to mandate that that right compels Christians to give up their religious freedom and liberty.

Moore wasn’t the only one on the religious right who compared Obergefell to Dred Scott. It became a talking point from Christian conservatives like Mike Huckabee and Rick Santorum two years ago. But Moore clearly went a step further by saying the decision was worse, not just listing it as another decision from the court he thought was terrible.

The fact is, Moore is a conservative Christian’s wet dream, a dangerous religious extremist who places his Christian faith above the U.S. Constitution, and believes that “God is the only source of our law, liberty and government.”

In addition, recently Moore told Vox that the U.S. Constitution was written to “foster religion and foster Christianity.”

Moore rejects science in favor of religious superstition, and rejects the indisputable fact that biological evolution is true. Recently Moore explained his rejection of science to the Washington Post, claiming:

Moore, like Trump, is a white nationalist and a birther who repeatedly questioned Barack Obama’s eligibility to be president.

Bottom line: Roy Moore is a dangerous Christian extremist who argues gay marriage is worse than slavery, and he is also on his way to being the next U.S. Senator from the sad state of Alabama. 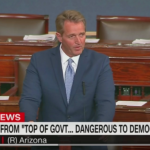 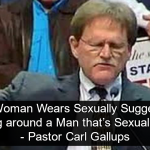