Christian Pastor Flip Benham justifies Roy Moore’s pursuit of a 14-year-old girl by claiming “there is something about the purity of a young woman.”

Benham, a vicious, anti-gay conservative Christian, and one of Moore’s most vocal defenders, tried to defend the indefensible by suggesting that it was acceptable for Roy Moore to pursue young teen girls when he was a much older man.

In his bizarre defense of a child molester, Benham said Moore’s sexual assault and harassment of young teen girls was justified because all the older “ladies” were taken after the war in Viet Nam, and Moore always sought out the permission of the parents of the young teen girls he was trying to date:

I think that, number one, you need to understand, 40 years ago, what the Sitz im Leben was like in Alabama. Judge Roy Moore graduated from West Point and then went on into the service, served in Vietnam and then came back and was in law school. All of the ladies, or many of the ladies that he possibly could have married were not available then, they were already married, maybe, somewhere.

In short, Benham is not denying that Moore was trying to date young teen girls. Instead, he is trying to justify the behavior of a child molester, by claiming that the child molester happens to be a godly man in search of the “purity” that only a teenage girl can possess.

In the interview, posted below via Right Wing Watch, Benham clearly states his opinion that it is perfectly acceptable for a 14-year-old girl to date a grown man as long as the parents approve. When pressed, Benham finally agrees that a grown man dating a ten-year-old girl would be unacceptable.

For the record, “Philip “Flip” Benham is an Evangelical Christian minister and the national leader of Concord, North Carolina-based Operation Save America, a pro-life group that evolved from another pro-life organization, Operation Rescue.” He is also a long time friend and supporter of Roy Moore.

Bottom line: Another leading conservative Christian is willing to justify crimes against children in order to promote their political candidate. 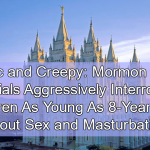 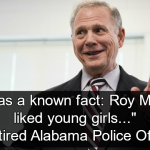