Pruitt cited a Bible verse from the book of Joshua, in which Joshua led the people of Israel to the promised land but asked them to choose between worshipping God or their “false gods.”

“Choose this day whom you will serve,” Pruitt said, quoting Joshua.

This is sort of like the Joshua principle. Either service on the committee to provide counsel to us in an independent fashion or choose the grant. But you can’t do both.

In the book of Joshua there is a story about Joshua leading the people of Israel into the promised land after Moses passed away. And Joshua says to the people of Israel choose this day whom you’re going to serve. And I would say to you this is sort of like the ‘Joshua Principle’ that as it relates to grants to this agency, you are going to have to choose either service on the committee to provide counsel to us in an independent fashion or you can choose grants, but you cannot do both.

Since he arrived at the agency, Mr. Pruitt has repeatedly worked to silence EPA scientists, deny the facts and discredit science inconvenient to his agenda; now he’s trying to get rid of the scientists altogether.

In an email to BuzzFeed News, Al Teich, a research professor of science, technology, and international affairs of George Washington University expressed his contempt for the new rule:

Frankly, this directive is nuts.

There is an important role for citizen advisors who are not experts in a scientific field and who represent various constituencies on advisory committees. But they should complement, not replace the experts. Disqualifying the very people who know the most about a subject from serving as advisors makes no sense.

In a statement, Rush Holt, CEO of the American Association for the Advancement of Science (AAAS), also denounced the new rule, declaring:

Leading scientific experts who are conducting environmental science research should not be prohibited from participating on EPA science adviser boards and committees if they have met the appropriate financial conflict of interest policy. Science and the use of science in evidence-based policymaking cannot thrive when policymakers use politics as a pretext to attack scientific objectivity. Given its desire to limit expert perspectives and the role of scientific information, we question whether the EPA can continue to pursue its core mission to protect human health and the environment.

However, not everybody was appalled at the new, Biblically driven, anti-science, directive. Leading climate change deniers like Republican Senator James Inhofe and Republican House Science Chairman Lamar Smith were pleased with the new rule.

Bottom line: EPA chief Scott Pruitt is using the the Bible’s Book of Joshua as a justification for  preventing expert scientists from serving on the EPA’s advisory boards.

Trump’s war on science continues, with a little help from the Bible. 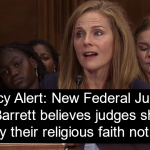 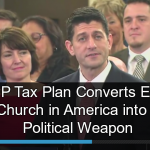 November 2, 2017 GOP Tax Plan Repeals Johnson Amendment, Making Churches Super PACs
Recent Comments
0 | Leave a Comment
"I am called a bigot, a fool, referred to as "my kind", "nigerian white supremacist ..."
MrPeach Texas Governor: ‘The Problem is Not ..."
"you sure can run your mouth here, now explain your downvote to my harmless comment. ..."
Joshua Booker Million MAGA March: Militias, Proud Boys, ..."
"now I see why you hide your name. Some TROLL in ya=== lol!"
Brian Carnevale Texas Governor: ‘The Problem is Not ..."
"The cowardly censor at FA banned me years ago.There was an uncensored Angry Atheist channel, ..."
Pablo.Dali Fox News Host Bill Hemmer Warns ..."
Browse Our Archives
get the latest from
Progressive Secular Humanist
Sign up for our newsletter
POPULAR AT PATHEOS Nonreligious
1