James Dobson, conservative Christian thought leader and founder of Focus on the Family, has no problem supporting Roy Moore in the upcoming Alabama senate race, despite the fact that Moore is a known child molester who preyed on young teenage girls while serving as an assistant District Attorney.

In the radio ad being played all over Alabama the conservative Christian thought leader says:

Hello everyone, I’m Dr. James Dobson. You know, last November I believe God gave America another chance with the election of Donald J. Trump. But he now needs the presence and leadership of Judge Roy Moore to make America great again. And that’s why I’m asking my friends in Alabama to elect Judge Roy Moore to the United States Senate. Judge Moore is a man of proven character and integrity, and he has served Alabama and this country very, very well. I’ve known him for over 15 years, but recently I’ve been dismayed and troubled about the way he and his wife Kayla have been personally attacked by the Washington establishment. Judge Moore has stood for our religious liberty and for the sanctity of marriage, when it seemed like the entire world was against him. I hope you’ll vote for Judge Roy Moore for United States Senate.

In the radio ad Dobson does not acknowledge that Moore is a child molester. Instead, Dobson only alludes to Moore’s crimes against children, noting that he has “been dismayed and troubled about the way he and his wife Kayla have been personally attacked by the Washington establishment.”

In fact, Dobson turns reality upside down by praising the child molester, declaring:

Judge Moore is a man of proven character and integrity…

Dobson’s hearty, unqualified endorsement of a viciously homophobic, birther-racist, theocratic, twice-impeached former judge and alleged child-molester is not surprising or newsworthy for suggesting anything new about James Dobson. We already knew that Dobson was a fan of homophobia and theocracy, and that he didn’t have any qualms about forming close alliances with white nationalists. And even Dobson’s carefree dismissal of all of the witness testimony alleging that Roy Moore is a long-time, serial molester of young girls doesn’t tell us anything new about Dobson. The essential untrustworthiness of women has always been the foundation of Dobson’s politics and of his religion, so of course he doesn’t believe any of the women accusing Moore.

Clarke is correct when he identifies Moore as “a viciously homophobic, birther-racist, theocratic, twice-impeached former judge and alleged child-molester;” and the observation that Dobson is “a fan of homophobia and theocracy” is also spot on.

Indeed, Dobson is a deplorable human being with a record of homophobia and hatred in the service of Christ and supposed “family values.” Last year, in an anti-Obama rant the Focus on the Family founder said that transgender people using public restrooms should be shot. Writing for World Net Daily Dobson complained about President Obama’s order to “every public school in America to open all its bathroom facilities including those that are in use by a member of the opposite sex.” Dobson wrote:

In short, Dobson gives Christians permission to shoot transgender people using a public bathroom, supposedly because such a crime would protect “little girls from men.” Yet by endorsing Moore, Dobson is sending a clear message that young girls don’t matter, and that “good, Christian men” like Roy Moore should be free to sexually harass and assault teenage girls without fear of consequence. 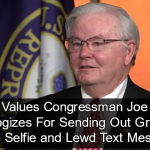 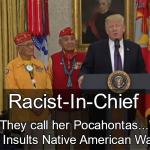