The interrogation and shaming of children and teenagers by the Mormon church is a routine ritual conducted in semi-annual “worthiness interviews.” In these interviews children are pressed to discuss their sexuality while alone with an untrained church elder, who is almost always an older man.

A new petition calling for an end to this alarming and dangerous practice reports:

For decades, it has been common practice for Bishops, Bishopric Counselors, Stake Presidents, and Stake President Counselors to pose questions of a sexual nature to children. There are reports of this happening to children as young as age 8. These questions are being asked by an older man, all alone with the child, behind closed doors and often without the knowledge or permission of the parents. Almost universally, these men have no comprehensive training.

The Mormon Curtain firmly believes that adult men asking sexual questions of minors behind closed doors is a criminal act.

Here is a list of potential harm. All the risks below are actual consequences that have been experienced from sexual interviews with LDS children.

Society-at-large recognizes that the Mormon practice of sexual interviews with children is wholly inappropriate. It’s a dangerous and damaging practice.

It’s time for us, as Mormons, and friends of Mormons, to stand up for our children…to stand up and require that children be protected.

We call on the LDS Church to publicly disavow this practice.

We call on the LDS Church to insure that all congregational leaders, as well the general membership, are informed that this practice is prohibited. 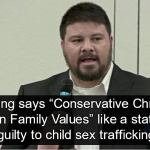 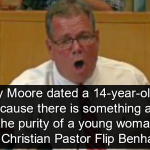 November 21, 2017 Christian Pastor: Roy Moore Likes Teen Girls Because They’re Pure
Recent Comments
0 | Leave a Comment
"Is any part of this situation by all parties concerned immoral and sinful?"
D.M.S. New Legislation In Tennessee Would Allow ..."
"Accept or don't accept the sites I provided. That is your choice. Christian sites are ..."
Mark Bradshaw Ana Kasparian’s Glorious Rant On Christianity ..."
"Any chance you could reference an actual scholarly site, I am not about to accept ..."
Kit Hadley-Day Ana Kasparian’s Glorious Rant On Christianity ..."
"Ohhh the scary "they". And who, exactly, are "they"? Wait, let me guess, it's the ..."
alverant Fox News Host Bill Hemmer Warns ..."
Browse Our Archives
get the latest from
Progressive Secular Humanist
Sign up for our newsletter
POPULAR AT PATHEOS Nonreligious
1