Bombshell: The Washington Post reports U.S. Senate candidate Roy Moore had a sexual encounter with a 14-year-old girl in 1979 when Moore was a 32-year-old district attorney.

Adding fuel to the fire, the report indicates that Moore pursued sexual relationships with at least three other underage women while serving as district attorney.

A new report out today contains four women who claim that Alabama senate candidate and former state Supreme Court chief justice Roy Moore pursued relationships with them while they were teenagers. One of them claims that the two had sexual contact.

Leigh Corfman says that when she was 14 Roy Moore, the current GOP Senate candidate in Alabama, initiated a sexual encounter with her. CBS offers a detailed account of the abuse:

Moore approached Corfman, outside a courtroom in Alabama while her mother was inside at a child custody hearing and struck up a conversation with her.

Moore told Corfman “how pretty she was and kissed her”…

Moore, on a second visit, took off Corfman’s shirt and pants and he removed his own clothes, … he touched her over her bra and underwear and “he guided her hand to touch him over his underwear.”

The Washington Post reports that three other women also say that Moore approached them and made sexual advances toward them when they were still teenagers:

Moore’s sexual misconduct stands in strike contrast to his image as an overly pious religious extremist. In fact, Moore is a dangerous religious extremist who places his Christian faith above the U.S. Constitution, and believes that “God is the only source of our law, liberty and government.”

Moore was removed not once, but twice, from his position as Chief Justice of the Alabama Supreme Court for his refusal to obey the law because it conflicted with his extreme Christianity.

In addition, Moore told Vox that the U.S. Constitution was written to “foster religion and foster Christianity.”

Moore rejects science in favor of religious superstition, and rejects the indisputable fact that biological evolution is true. Recently Moore explained his rejection of science to the Washington Post, claiming:

Moore, like Trump, is a white nationalist and a birther who repeatedly questioned Barack Obama’s eligibility to be president.

Moore, now 70, is competing in the special election in Alabama on Dec. 12 against Democrat Doug Jones.

Bottom line: Roy Moore is a dangerous Christian extremist who sexually abused a 14-year-old-girl, and pursued sexual relationships with at least three other underage girls while serving as a district attorney. 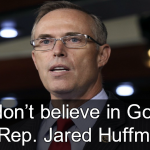 November 9, 2017
Congressman Jared Huffman Is Good Without God
Next Post 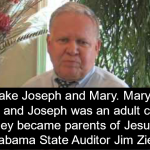