Televangelist Jim Bakker: Buy My Pancake Mix Or Your Grandkids Go To Hell

Hard sell: Weeping televangelist Jim Bakker warns viewers that if they don’t buy his pancake mix their grandchildren will go to Hell.

An emotional Bakker went on a tear-filled rant begging his audience to buy buckets of his End Times survival food, warning that the grandchildren of his audience members would face eternal damnation unless they called a 1-888 phone number so they could send him $60 (plus shipping) for a bucket of pancake mix.

Bakker, deeply concerned that President Trump would be killed by Democrats, declared:

If they kill our president or they destroy him or whatever, if we elect the other side. This is it. I think maybe Trump is here to give us time to get ready because all hell is going to break loose.

We’re not going to have the Antichrist show up to get the sign of the Mark of the Beast on our forehead or hand, it won’t happen without hunger. Hunger is going to be the main thing. Most people don’t get it, they don’t want to get it, but that is why I am so obsessed with you all being prepared.

After Bakker’s wife, Lori, warned that Christians will accept the Mark of the Beast when they see that their children and grandchildren are starving, Bakker brought out his newborn grandson, and said:

I hear them crying, I’ve heard them crying for years and God says, ‘What will you do if these babies are starving?’

Reporting on the story, Right Wing Watch notes that immediately after the tear-filled, emotional segment, “the program then immediately cut away to a pre-filmed segment promoting Bakker’s $1,500 “Complete Grocery Store” survival package.”

Bakker resigned from his Assemblies of God ministries after facing accusations of drugging and raping an employee. He was convicted of fraud and imprisoned. 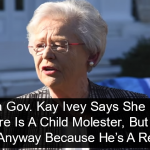 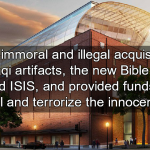 November 19, 2017 Corrupt Hobby Lobby Bible Museum Opens In Washington D.C.
Recent Comments
0 | Leave a Comment
Browse Our Archives
get the latest from
Nonreligious
Sign up for our newsletter
POPULAR AT PATHEOS Nonreligious
1