Trump meant to insult Elizabeth Warren by referring to her as “Pocahontas” at the White House event honoring the elderly surviving members of the Navajo Code Talkers, who were recruited by the Marine Corps during World War II to deliver messages that the Japanese were unable to translate.

However, all Trump managed to do was to insult the Native American heroes and embarrass himself and the nation with his casual and insensitive bigotry and racism.

You were here long before any of us were here, although we have a representative in Congress who they say was here a long time ago, they call her Pocahontas.

Pres. Trump at event honoring Native American code talkers: “We have a representative in Congress who they say was here a long time ago. They call her Pocahontas.” https://t.co/opyDjrpBLu pic.twitter.com/7Acmjnzwee

The deplorable comment was met by total silence, as those in attendance were astonished by the insensitive and cruel remarks.

When asked, Warren slammed Trump for referring to her as “Pocahontas” during the White House event honoring the Native American code talkers. Warren told MSNBC:

It is deeply unfortunate that the President of the United States cannot even make it through a ceremony honoring these heroes without throwing out a racial slur.

Donald Trump does this over and over, thinking that somehow he is going to shut me up with it. It hadn’t worked in the past, it is not going to work in the future.

Why is it appropriate for the president to use the racial slur in any context?

I don’t think it is appropriate for him to use a racial slur or anyone else.

However, when pressed, Sanders said it was “ridiculous” to characterize “Pocahontas” as a racial slur.

Bottom line: Trump is a racist who makes causal racial slurs without a second thought, and he is surrounded by willing accomplices like Sanders who will defend without question the Racist in Chief. 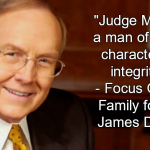 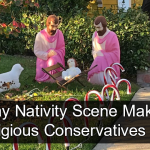