The evidence that Roy Moore was molesting children while working as an assistant District Attorney in Alabama is overwhelming, and many of Moore’s conservative Christian defenders do not even bother to deny the charges.

Some conservative Christians excuse the transgression, arguing that there was nothing wrong with a 30-year-old Moore sexually pursuing teenage girls as young as 14. Other conservative Christians admit that being a child molester is wrong, but argue that supporting an honorable Democrat like Doug Jones would be worse than supporting a disgraceful child molester like Roy Moore, simply because Moore is a Republican.

This gross moral hypocrisy leaves many people scratching their heads, wondering what is wrong with conservative Christians. For example, a popular front page post on Reddit opines:

Christian conservatives repeatedly told me “uhh, if we let a man marry a man, next thing we know we’ll have to ‘tolerate’ pedophiles.” Well, I’ll be damned. Here we are merely 2 1/2 years after legal gay marriage and the GOP and evangelicals are falling all over themselves to support a pedophile.

Who knew the very folks warning us about pedophiles would turn right around and vote for a pedophile when one turned up in their own political party?

James Dobson, conservative Christian thought leader and founder of Focus on the Family, has no problem supporting Roy Moore in the upcoming Alabama senate race, despite the fact that Moore is a known child molester who preyed on young teenage girls while serving as an assistant District Attorney.

Another example, Christian Pastor Flip Benham justifies Roy Moore’s pursuit of a 14-year-old girl by claiming “there is something about the purity of a young woman.”

Benham, a vicious, anti-gay conservative Christian, and one of Moore’s most vocal defenders, tried to defend the indefensible by suggesting that it was acceptable for Roy Moore to pursue young teen girls when he was a much older man.

In his bizarre defense of a child molester, Benham said Moore’s sexual assault and harassment of young teen girls was justified because all the older “ladies” were taken after the war in Viet Nam, and Moore always sought out the permission of the parents of the young teen girls he was trying to date.

Alabama Governor Kay Ivey is no better. Ivey has stated that she believes that Roy Moore is a child molester, but will vote for him anyway.

Speaking at a Thanksgiving turkey pardon event, Gov. Ivey placed party over morality, saying she would support Moore despite the fact that the man is an unrepentant child molester. Ivey said:

I believe in the Republican Party, what we stand for, and most important, we need to have a Republican in the United States Senate to vote on things like the Supreme Court justices, other appointments the Senate has to confirm and make major decisions. So that’s what I plan to do, vote for Republican nominee Roy Moore.

Note: Gov. Ivey acknowledged that Moore is an unrepentant child molester. When asked, the governor said she believed the multiple victims who report Moore sexually abused and harassed them as teenagers. Asked if she believed Moore’s accusers, Ivey said:

Ivey said the fact Moore is a child molester “bothers” her, but will not prevent her from voting for Moore in the senate election

Commenting on the explosive scandal, Ziegler told the Washington Examiner:

There is nothing to see here. The allegations are that a man in his early 30s dated teenage girls. Even the Washington Post report says that he never had sexual intercourse with any of the girls and never attempted sexual intercourse.

After asserting that “there is nothing to see here,” Ziegler went on to use scripture from the Bible to defend Moore’s criminal behavior. Ziegler said:

He’s clean as a hound’s tooth. Take the Bible. Zachariah and Elizabeth for instance. Zachariah was extremely old to marry Elizabeth and they became the parents of John the Baptist.

Ziegler then went on to invoke Christ to defend Moore:

Also take Joseph and Mary. Mary was a teenager and Joseph was an adult carpenter. They became parents of Jesus.

That’s right. Let that sink in for a minute. According to Ziegler, in Alabama, sexually abusing a 14-year-old girl is “nothing immoral or illegal,” but “maybe just a little bit unusual.”

Bottom line: The same conservative Christians who claimed gay marriage would lead to pedophilia now want people to vote for a child molester. 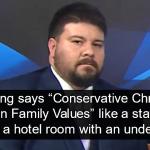 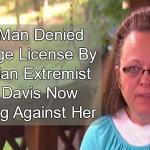