Out of order: A Texas judge interrupts a deliberating jury to claim that God told him the defendant is not guilty.

In Texas, Comal County Judge Jack Robison tried to convince a jury that a defendant was not guilty because God told him so.

By invoking an imaginary conversation with an imaginary God, Judge Robison was trying to “sway jurors to return a not guilty verdict in the trial of a Buda woman accused of trafficking a teen girl for sex.”

According to the Herald-Zeitung in New Braunfels, Judge Jack Robison apologized to jurors for the interruption, but defended his actions by declaring:

However, despite the judge’s declaration on behalf of God, the jury disagreed with both God and the judge, and found the defendant guilty. The Statesman reports:

The jury went against the judge’s wishes, finding Gloria Romero-Perez guilty of continuous trafficking of a person and later sentenced her to 25 years in prison. They found her not guilty of a separate charge of sale or purchase of a child.

The Herald-Zeitung in New Braunfels reports a similar finding concerning the Texas judge:

The panel of seven men and five women took just a couple of hours to find that enough evidence existed to convict 32-year-old Gloria Elizabeth Romero Perez on one count of continuous traffic of a person. They acquitted her on a second charge, sale or purchase of a child.

Robison’s actions could trigger an investigation from the State Commission on Judicial Conduct, which has disciplined Robison in the past.

The act of intervening in a jury’s deliberations is not addressed in the state’s list of judicial canons, which serves as an ethical code for judges. However, it states judges shall “comply with the law and should act at all times in a manner that promotes public confidence in the integrity and impartiality of the judiciary.”

Eric Vinson, executive director for the commission, said he would not be able to confirm or deny if a complaint had been filed against Robison.

So, to sum up, a presiding judge told a deliberating jury that God had spoken with him, and told him that an individual charged with “trafficking a teen girl for sex” was actually not guilty. But the evidence said otherwise, and so the jury ignored the judge and God, and found the accused guilty.

The good news: The jury dismissed the judge’s special pleading on behalf of God.

The bad news: Judge Robison believes that God is talking to him, and he is also a working judge in the state of Texas.

Bottom line: Weep for Texas; weep for the nation. 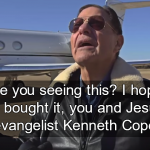 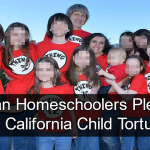