Theocracy alert: With a cross of light and a nod to “faith,” President Trump promotes Christianity on Religious Freedom Day.

Trump’s Religious Freedom Day proclamation is a troubling document that promotes conservative Christian values while suggesting that religious belief should supersede the rule of law.

In his proclamation Trump praises “faith” while declaring:

Unfortunately, not all have recognized the importance of religious freedom, whether by threatening tax consequences for particular forms of religious speech, or forcing people to comply with laws that violate their core religious beliefs without sufficient justification.  These incursions, little by little, can destroy the fundamental freedom underlying our democracy.  Therefore, soon after taking office, I addressed these issues in an Executive Order that helps ensure Americans are able to follow their consciences without undue Government interference and the Department of Justice has issued guidance to Federal agencies regarding their compliance with laws that protect religious freedom.  No American — whether a nun, nurse, baker, or business owner — should be forced to choose between the tenants of faith or adherence to the law.

Note the last line in that loaded and troubling paragraph:

No American — whether a nun, nurse, baker, or business owner — should be forced to choose between the tenets of faith or adherence to the law.

In essence, Trump is making the dangerous and patently unAmerican assertion “that no American should have to obey the law if it conflicts with their religion.”

Trump’s assertion is contrary to the U.S. Constitution and the secular values upon which this nation was founded.

In that troubling paragraph Trump is not only suggesting that religious superstition should supercede the rule of law, he is also attacking, as he has on many others occasions, the Johnson Amendment, which is the only thing that prevents dark money from being secretly funneled through religious organizations into political campaigns.

In fact, without the Johnson Amendment, every church would be a potential Super PAC, and a potential political weapon.

Writing for Peacock Panache, and commenting on the question concerning the rule of law, Tim Peacock notes:

In his Religious Freedom Day proclamation, Donald Trump made a consequential and problematic statement placing religious liberty above rule of law. Were this a ceremonial gesture meant as a statement of goodwill and not one in a line of related actions and statements, it wouldn’t be cause for concern. Given this administration’s statements, actions and directives, however, today’s proclamation offers yet another reason to worry.

Peacock is correct. Trump’s Religious Freedom Day proclamation is not an isolated incident, but part of a well established pattern where Trump and other leading Republicans use the phrase “religious freedom” when talking about and promoting what is in reality Christian privilege.

Indeed, last may Trump signed an executive order on religious freedom that gives individuals and organizations a license to discriminate against women and LGBT Americans.

As one might expect, in his proclamation, Trump did not even acknowledge the non-religious, ignoring and ultimately disrespecting a large minority of Americans.

Adding insult to injury, the promotional photo used to promote Trump’s Religious Freedom Day proclamation features the U.S. flag being pierced by a cross of light. The Christian symbolism could not be more clear, or more offensive, to the millions of Americans who are not Christian.

Bottom line: Rather than truly endorsing religious freedom for all, Trump’s Religious Freedom Day proclamation is yet another tacit endorsement of Christian privilege, and ultimately, Christian theocracy. 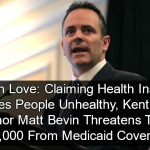 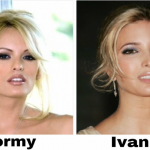