Trump’s Spiritual Advisor: Give Me Money Or Suffer Consequences

Extortion in the name of God: Televangelist Paula White, Trump’s spiritual advisor, tells followers to give her money, or suffer the consequences.

In a deplorable display of extortion in the name of the Lord, Paula White tells her followers to give her money or suffer the “consequences” for failing to obey God’s command.

Popular televangelist Paula White is urging her followers to donate a “first fruits” offering of up to their entire salary for the month of January to enjoy “blessings” for the rest of the year or suffer the “consequences” of failing to follow God’s command.

The money grubbing charlatan tried to justify her blatant attempt at extortion on her website by explaining “The Principles of First Fruits”:

Each January, I put God first and honor Him with the first of our substance by sowing a first fruits offering of one month’s pay. That is a big sacrifice, but it is a seed for the harvest I am believing for in the coming year. And God always provides!

White explains that if her followers do not give her money they will be punished by God because:

God lays claim to all firsts. So when you keep for yourself something that belongs to God you are desecrating what is to be consecrated to God.

White is known for preaching the controversial “prosperity gospel,” an immoral but popular method of relieving Christians of their hard earned cash; a method used by many if not most televangelists.

White’s message is stupid but simple: Money is a seed, and if you give money to the supposed messenger of God, in this case White, your “seed investment” will be returned to you by your imaginary God in a harvest of cash.

It is a deplorable con used to hustle gullible rubes blinded by ignorance and religious superstition.

In addition to preaching the “prosperity gospel,” the immoral televangelist is also Donald Trump’s spiritual advisor. Earlier this year White appeared on pastor Jim Bakker’s television program, where she declared that Christians will take over the U.S., and that any opposition to Trump is opposition to God.

At the time White said:

… whether people like him or not, he’s been raised up by God because God says that He raises up and places all people in places of authority. It is God that raises up a king, it is God that sets one down and so when you fight against the plan of God, you’re fighting against the hand of God.

Bottom line: Pastor Paula White, Trump’s spiritual advisor, threatens her gullible followers with God’s punishment if they do not give her money. 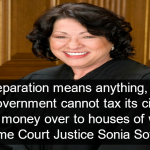 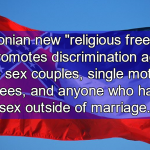 January 8, 2018 Supreme Court Allows Draconian ‘Religious Freedom’ Law To Stand
Recent Comments
0 | Leave a Comment
"Tippling Philosopher is widely regarded as perhaps the best Patheos non religious blogs."
Geoff Benson Fox News Host Bill Hemmer Warns ..."
"Reminds me of condemnations of rock-&-roll by Southern Baptists (& other like-minded fundies) back in ..."
Georgia Sam Pentecostal Christians Are Burning Australia’s Sacred ..."
"I am called a bigot, a fool, referred to as "my kind", "nigerian white supremacist ..."
MrPeach Texas Governor: ‘The Problem is Not ..."
"you sure can run your mouth here, now explain your downvote to my harmless comment. ..."
Joshua Booker Million MAGA March: Militias, Proud Boys, ..."
Browse Our Archives
get the latest from
Progressive Secular Humanist
Sign up for our newsletter
POPULAR AT PATHEOS Nonreligious
1