Faith healing kills kids: Protesters march against Idaho Republicans who believe parents have the right to kill their children with prayer.

Idaho is the faith healing state, the state where religious extremists go when they want to deny their children access to modern medicine, often with tragic consequence. Earlier this week, concerned citizens marched to the Idaho Capitol to call on “Idaho lawmakers to repeal the state’s faith-healing exemption.”

Protesters marched to the Idaho Capitol Monday bearing 183 child-sized, symbolic coffins, which they stacked on the Statehouse steps as they called for Idaho lawmakers to repeal the state’s faith-healing exemption. That law spares parents from criminal or civil liability if they deny their children medical care and the kids die.

The protesters said at least 183 Idaho infants, children and teens have died since the exemption laws were enacted by the Idaho Legislature in the 1970s.

Protect Idaho Kids, organizers of the march, explains the purpose of the protest:

Indeed, the sad fact is that Republican lawmakers refuse to support legislation that would protect children by changing Idaho’s deplorable faith healing exemption to the state’s child abuse laws.

Currently a religious shield law protects parents who claim to be acting out of religious faith, so when a child dies in Idaho due to lack of medical care, faith healing parents are not held accountable.

The practice of a parent or guardian who chooses for his child treatment by prayer or spiritual means alone shall not for that reason alone be construed to have violated the duty of care to such child.

In effect, the law allows parents to martyr their children for their faith, choosing prayer over modern medicine without fear of legal consequence.

Idaho Republicans are protecting Christian extremists like the Followers of Christ Church, a notorious collection of small and secretive Christian fundamentalist congregations that make a habit of watching their children die rather than seek medical attention. The church teaches that modern medicine should be shunned in favor of prayer, and the consequences of church doctrine have been tragic: the preventable deaths of many innocent children.

The church preaches faith-healing and rejects modern medicine in favor of prayer and other spiritual practices such as anointing the sick with oil. The church is notorious for allowing sick children to suffer and even die rather than seeking medical attention.

Previously Idaho Rep. Christy Perry (R) claimed faith-healing parents have a First Amendment right to deny medical care to their children on religious grounds, arguing that they are perhaps more comfortable confronting the death of their children.

Children do die. I’m not trying to sound callous, but (reformers) want to act as if death is an anomaly. But it’s not — it’s a way of life.

Apparently trying to justify the hideous act of allowing a child to die due to lack of medical attention, Perry added:

They are comforted by the fact that they know their child is in heaven. If I want to let my child be with God, why is that wrong?

Perry’s words are perverse and despicable. To allow a child to die so as to be with an imaginary god is beyond abuse, it is madness.

Child advocate Marci A. Hamilton sums up the dismal situation for children in Idaho:

Idaho has become a destination for believers who use faith only to treat illness and whose children, therefore, die in stunningly large numbers from easily treatable illnesses. The state’s religious exemption for medical neglect and its extreme religious liberty statute make Idaho a haven for parents who would martyr their children for their faith. This is not what the Framers intended or what the First Amendment requires. The blood of these children is on the hands of the state legislators who continue to fail to make Idaho a safe haven for its children because of irrational deference to parents and faith.

Bottom line: Idaho Republicans fail to protect children from faith healing parents, and fail to punish negligent parents who choose to substitute prayer for medical treatment. By failing to act, Idaho Republicans put children at risk, and continue to have the blood of innocent children on their hands. 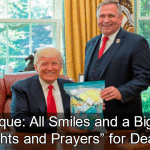