Speaking with Parade magazine in 1981, the famed evangelist declared that religious leaders  “can’t be closely identified with any particular party or person.”

At the time, Graham was criticizing the work of Jerry Falwell, founder of the infamous anti-gay group known as “The Moral Majority.”

Snopes investigated the statement after a meme went viral quoting Graham as saying:

I don’t want to see religious bigotry in any form. It would disturb me if there was a wedding between the religious fundamentalists and the political right. The hard right has no interest in religion except to manipulate it. 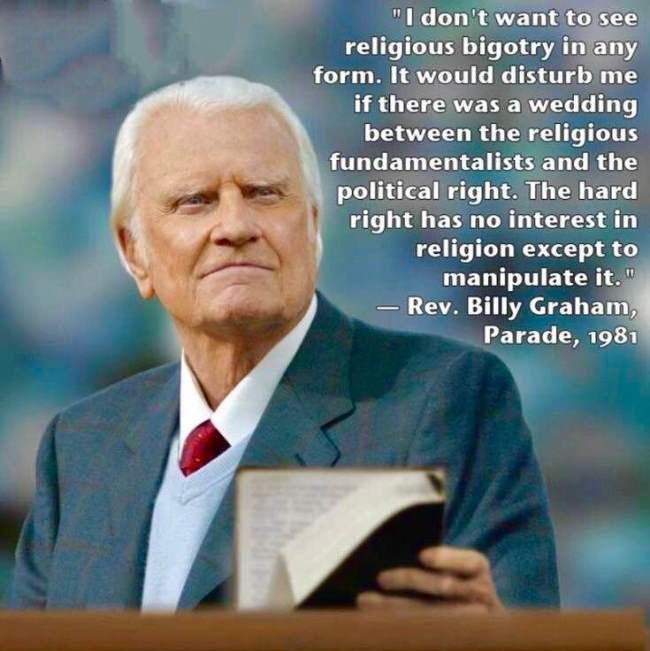 Snopes found the quote cited in the meme to be true and accurate.

Speaking of Falwell in the 1981 interview, Graham said:

I told him to preach the Gospel. That’s our calling. I want to preserve the purity of the Gospel and the freedom of religion in America. I don’t want to see religious bigotry in any form. Liberals organized in the ’60s, and conservatives certainly have a right to organize in the ’80s, but it would disturb me if there was a wedding between the religious fundamentalists and the political right. The hard right has no interest in religion except to manipulate it.

In the interview Graham went on to make it clear that he was not a part of Falwell’s anti-gay political movement:

It would be unfortunate if people got the impression all evangelists belong to that group. The majority do not. I don’t wish to be identified with them. I’m for morality. But morality goes beyond sex to human freedom and social justice. We as clergy know so very little to speak out with such authority on the Panama Canal or superiority of armaments. Evangelists can’t be closely identified with any particular party or person. We have to stand in the middle to preach to all people, right and left. I haven’t been faithful to my own advice in the past. I will be in the future.

Reaffirming his position, Graham told Christianity Today in 2011 that, if given the chance to change anything, he “would have steered clear of politics.” Snopes reports:

While the elder Graham has had relationships with several U.S. presidents spanning decades, he told Christianity Today in 2011 that, given the chance to do anything differently in his life, “I also would have steered clear of politics.”

Graham was right to distance himself from the cruel and mean-spirited bigotry of Falwell and the Moral Majority. And he was right to note the risk in mixing religion and politics.

The irony is that both his son, Franklin Graham, and his daughter, Anne Graham Lotz, have used their father’s legacy to promote a toxic conservative Christian agenda that freely mixes religion and politics to the detriment of both.

Bottom line: Billy Graham had the good sense to recognize that when mixed together, religion and politics become toxic. 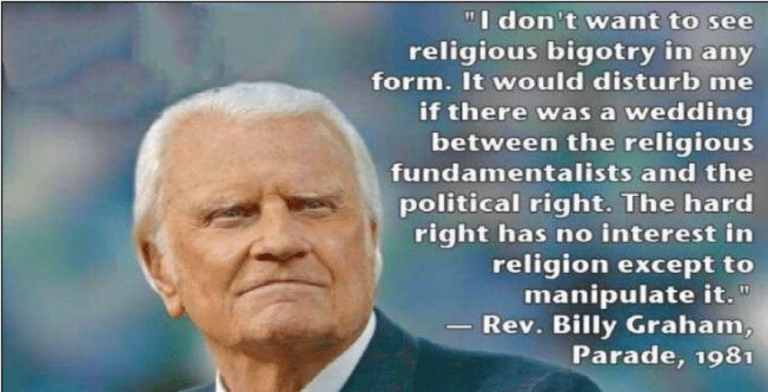 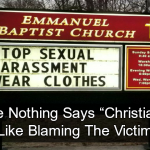 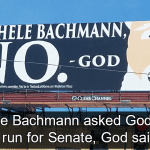